Cumberland, ME — For the second time this week a horse bred by the sport’s leading nursery, Hanover Shoe Farms, set a track record.  Thursday night at Rosecroft World Champion Allywag Hanover paced the fastest mile in history of the sport on a five-eighths mile track.  The 5-year-old gelding by Captaintreacherous won the Potomac Pace in a swift 1:46.4f, which was a world and track record performance. 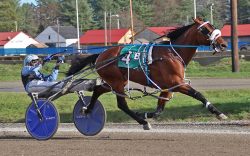 Driven by Kevin Switzer Jr. the 5-year-old son of Western Ideal sprinted right out for the lead from post position four.  Hitting the opening panel in 27.3, Switzer Jr. applied the brakes into a 58.1 half.  As the outer flow started to advance Adriano Hanover responded to the reinsman’s urging and gained further separation into 1:25.4 third stanza and sprinted home a victor by 5-3/4 lengths with a 28 second final kick.

Adriano Hanover is owned and trained by Gerald MacKenzie Jr., and picked up the 17th victory of his career, which is closing in on $250,000 in lifetime earnings.   He paid $3.00 to win the $6,500 Open 2 Pace featured race of the afternoon.

The $6,000 Open 3 Pace was captured by Star Speaker (Drew Campbell) in 1:57, who got up in the final strides to nip Terror Hall (Wally Watson) by a nose.  Trained and owned by Kimberly Vafiades (with Greg Kirby) the 5-year-old son of Artspeak has won 9 races this season.  He paid $3.60 to win.

Kevin Switzer had a grand slam on the program, which also included Oceanview Echo ($8.80 to win), Eleanor Jean ($6.40) and Native Maverick ($27.20) who was four-wide down the backside to score from dead last at the quarter pole.

The Sunday (Nov. 13) program has twelve races, five of them trots.  The $6,500 Open 2-3 Trot features last week’s victor Favorite Uncle (Cain MacKenzie) who scores from post position four.  Outside him is the trending Broadway Giant (PP 5, Bruce Ranger) who won three-in-a-row before moving up to this class.  This race also marks the return of local fan favorite Cherry Crown Jewel (PP 3, Mark Athearn), who set a track record at Cumberland last year and is coming off a win at Bangor.

First Tracks Cumberland is proud to present the Polar Express Late Closing Series for the Winter meet.  Beginning Dec. 2-4, the three individual TrackMaster rating and conditioned events boast over $85,000 of additional earning opportunities for New England horse people, for which there is no entry fee.  For further details, visit the horsemen page on our website, or by clicking here.

First Tracks Cumberland and the Maine Harness Horsemen’s Association are collecting nonperishable food items in the race paddock during the next two weekends of racing to benefit the Mid Coast Hunger Prevention Program.

Racing continues at First Tracks Cumberland for our Winter Festival extended pari-mutuel meeting featuring a weekly trifecta of cards on Friday, Saturday and Sunday (Nov.18, 19 & 20) which continues through December 24, 2022.