Lexington, KY — All I can say is “wow!” Wow! Hard to believe that this is now 20 years of doing Backstretch With Gordon from The Red Mile during the two-week meet that is loaded with Grand Circuit racing, capped off by the Kentucky Futurity for 3-year-old trotters.

This is year number two with Backstretch With Gordon on ustrotting.com after 18 years on harnessracing.com. Very grateful that U.S. Trotting Association executives Mike Tanner and TC Lane reached out to me when The Horseman and Fair World shut down operations early last year. I can tell you that working this past year and a half with the entire USTA communications team (Dan, Paul, Ken, Wendy, Kyle, Mark, Rich, Gena, Heather, James and Boss Kathy) has been a pleasure. 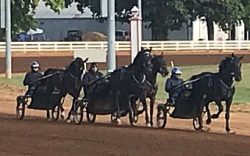 Horses got their work in on Wednesday morning at The Red Mile. Gordon Waterstone photo.

As for The Red Mile backstretch, it was a chilly 40 degrees when I arrived this Wednesday morning, with the barn area relatively quiet. Remember that the racing schedule has changed slightly this year and cards will be contested this week on Thursday, Friday and Saturday afternoons, and next week on Friday, Saturday and Sunday afternoons. Post time all days is set for 1 p.m.

My first stop this morning was the breakfast table set up by Cindy Solverson near The Deck. Bagels, donuts and coffee were there and I admit I was hungry so I double dipped the bagels. Cindy told me today’s breakfast was sponsored by Hunterton Farm, which is great since owners Steve and Cindy Stewart are also the sponsors of Backstretch With Gordon. There were some attempts by others to outbid the Stewarts’ Hunterton Farm and Hunterton Sales Agency for sponsorship rights, but after speaking to my agents Amy Hollar and Nick Salvi, it was decided that the Stewarts will always be the best fit. I am grateful for the backing of Steve and Cindy now for many years.

When I arrived at the breakfast table the first person I saw was Dewayne Minor. Like me, Dewayne is a former Detroiter and our relationship goes way back. One of my all-time favorite stories I was able to write through the years came when Dewayne won the 2010 Kentucky Futurity with Wishing Stone.

As I was leaving the breakfast table to make my rounds, Cindy asked me to note that on Friday a barbecue sponsored by Bluegrass Staking will take place, with food available beginning at 11:30 a.m. I know where I’ll be at 11:30 a.m. on Friday, as that will give me 90 minutes before the races start to eat all I can.

While I usually do a circle around the barn area on the first morning, today I headed straight for the barn of Joe Holloway. I’ve had dinner with Joe a few times already the past couple of weeks (most recently on Monday night when I met him, Dave Brower, Gabe Prewitt, Nick Salvi and Dr. Karl Nagle at The Ketch) and I had a bottle of bourbon to give him. Last March I won a raffle at a local establishment to buy a bottle of bourbon at cost and I picked the 750 ML of EH Taylor Single Barrel for just $65. I gave the bottle to Joe and he asked, “Are you sure you’re not going to take this one back?” to which I replied, “Absolutely not.” 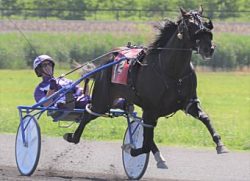 I asked Joe about his 2-year-old Sweet Lou colt pacer Ammo who is in to go in a $109,000 Bluegrass division on Friday. Ammo, who is a half-brother to Always A Miki, who earned nearly $500,000 for trainer Nancy Takter, starts from post seven in race six with David Miller, with this being just his second career start. After winning a pair of June qualifiers at Gaitway Farm, Ammo suffered a back injury and after three months off returned to the races with a qualifying victory and then a win in his pari-mutuel debut in a Sept. 19 overnight at The Red Mile in 1:52.4.

“I think he’s for real,” Joe told me about the $90,000 yearling owned by Marty Granoff’s Val D’Or Farms and Ted Gewertz. “I think he’s up to it on Friday but it will be a tough task against the Grand Circuit horses.”

Karl arrived so I said hello and as I was heading out Diane and her dog Roxie came over to me. I made my way back to the start by the breakfast table and then went my usual path, taking me by Nancy Takter’s barn. Nancy said hello and I asked if she and Julie Miller were going to do a charity bartending gig like they did last year and she said they were working on it. I’ll keep y’all posted on that.

Speaking of bars, let me interrupt that with no racing on Sunday some of you may want to head out to watch football or just have a quiet day. Of course there are nearby places like Buffalo Wild Wings and Campus Pub, and some horsemen make their way over to Banners on Man O’War and Boston Road, but there’s a new place in town that’s only about five minutes from The Red Mile. It’s called The Neon Moon Bar and Lounge and it’s on Alexandria, across from Kroger. Tell the owner Neil or any of the bartenders, including my great friend Chasity, I sent ya. I have drink coupons with me so if you see me just ask and I’ll give you some.

Now that the commercial break has ended, it’s time to shift back to the track and it was after leaving Nancy’s barn that I saw Tony Alagna coming off the track. Tony seemingly has horses in half the barn area so I asked him how many horses he had, and he replied (with a laugh): “I have no idea. No idea.”

Others who went by me and said hello included Brad McNinch, George Ducharme, Jan Johnson, Dave Menary and PJ Fraley, another longtime Michigander friend who is an assistant in Ron Burke’s barn.

I saw Chris Ryder coming off the track and I asked which of his stable’s stars he had with him. Chris told me it was his 3-year-old filly pacer Niki Hill. After a spectacular 2-year-old season in which Niki Hill won nine of 10 and garnered Dan Patch Award divisional honors, injuries have limited her sophomore campaign to just two starts, one last May and the most recent a second-place finish at The Meadowlands on Sept. 16. Chris trained Niki Hill yesterday and he told me he took her a slow mile in 2:30 this morning, and she’s ready for her start on Saturday in a Bluegrass race.

Steve Elliott, who is helping out in the barn of trainer Tom Canciellere, yelled over at me so I went over to talk to yes, another former Michigander. I remarked to Steve about the diminutive size of one of the horses and he told me it was Feel My Wrath. The 2-year-old gelding pacer, who has a Pocono win in seven starts, will line up behind the gate at The Red Mile on Friday afternoon in an overnight.

I stuck my head in the race office and saw Curby Stillings, and she and I caught up for about 10 minutes. Always great talking to Curby.

I then started to head back to the breakfast table (I was still hungry) when I bumped into Jim Campbell. I again congratulated Jim on a spectacular Hambletonian Day at The Meadowlands early last month when he won the Hambo with Cool Papa Bell and the Hambletonian Oaks with Fashion Schooner. “It’s a day I’ll never forgot,” understated Jim.

Program director Tom Agosti came over to speak to Cindy about some program changes and it was then I saw Dave Brower getting some coffee. Nick Salvi also made his way over and then Myron Bell came up to me and pulled out his phone and showed me a photo of a very handsome young man. Myron asked if I knew who it was and I replied that it was absolutely him. Myron told me that the photo was taken when he was just 17 years old.

I knew it was time to leave when Trackman Dan made an appearance. Dan and I talked about a local mutual friend and when he told me he didn’t have any race news to give me, I headed for the car to come back to my home office to write this column.

And what ya’ll are waiting for: Gas prices are all over the place in Lexington. I filled my tank yesterday and using a 50-cent discount on my Kroger card I knocked the price from $3.26 to $2.76. I saw some stations this morning still at $3.49 a gallon so you’ll have to do some shopping for the best price.

As for this week’s weather, it will be cool the next two days with highs of 70, and then only reaching the high 60s on Saturday and Sunday. And then of course it will be chilly nights in the low 40s. Saturday doesn’t look too good right now as remnants of Hurricane Ian are expected to reach the Bluegrass so it looks like a wet day.

Remember the changes in the race schedule this year and remember that the Lexington Selected Yearling Sale at Fasig-Tipton gets underway on Monday night. The sale then shifts to the afternoon on Tuesday, Wednesday and Thursday before returning to a nighttime session on Friday night, with the mixed sale on Saturday night.

Finally, a heads up if you’re looking for something to do on Thursday night (Oct. 4). Keith Urban will be at Rupp Arena. I’ve had tickets a long time but there are still some available.