Elora, ON — Eliminations will go for both of Grand River Raceway’s marquee events after 13 dropped into the box for the Battle of Waterloo, presented by Winbak Farms, and 19 entered for the Battle of the Belles. 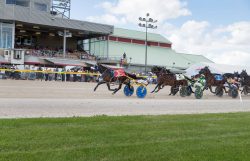 The first Battle of Waterloo elimination goes as Race 5 and the second as Race nine. Elimination one gathers six including Wall Street Bell, a Blake MacIntosh pupil who enters off back-to-back wins in Ontario Sires Stakes (OSS) Grassroots, as well as a pair dropping from OSS Gold in Ed and Ashleigh Hensley’s Coop A Loop and Gregg McNair’s Sounds Good. The second elimination with seven aligning features Moment Is Here, who holds the national season’s record for a pacing gelding on a seven-eighths track in the early season when winning on debut at Mohawk in 1:53.4.

Monday’s card opens with the first of three eliminations for the Battle of the Belles. Cheesy Smile, who shares the fastest mile for a freshman pacing filly in Canada this season, draws the outermost post in the field of six off a runner-up finish in an OSS Gold split at Mohawk. Elimination two groups seven developing fillies in Race 3, and the third elimination pins Big Big Plans – the other freshman filly holding the national season’s record – against five foes when she starts from post five in rein to Trevor Henry for trainer Bob McIntosh in race seven.

For the two Battle of Waterloo eliminations, the top-four finishers will advance to the est. $240,000 final with a fifth-place finisher drawn by lot. The three Battle of the Belles eliminations will pull the top-three finishers for the est. $160,000 final, all going to post on the 32nd edition of Industry Day on Monday, Aug. 1. The winner of each elimination earns a guaranteed draw between posts 1 and 5 for their respective finals.