Delaware, OH — Bluebird Dove trotted the fastest mile by a 3-year-old on a half-mile track in history, winning Wednesday’s $91,500 Buckette for sophomore female trotters by three-quarters of a length over Disclosure in 1:52.2 at the Delaware County Fairgrounds. Valentina Blu, the favorite, finished third.

The previous fastest mile by a 3-year-old trotter on a half-mile oval also was set by a filly, Herculisa, who trotted 1:52.3 last season at Northfield Park. The previous track record at Delaware for a 3-year-old filly trotter was set by Frau Blucher, who won the 2013 Buckette in 1:53.1. 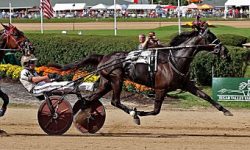 Bluebird Dove trotted the fastest mile by a 3-year-old on a half-mile track in history. Conrad photo.

After Disclosure led the 10-horse field to the first quarter in :27.1, driver Peter Wrenn moved Bluebird Dove to the front and hit the half in :56.1 and three-quarters in 1:24.1. Bluebird Dove fended off a first-over challenge from Valentina Blu and held off Disclosure in the stretch to get the victory.

Bluebird Dove was unraced as a 2-year-old. She has won six of 13 races this year and earned $173,206 while competing on the Indiana circuit.

“I had a lot of confidence in her,” Wrenn said. “She’s a very smart filly, classy, so I had confidence in her. Then she shows up like that. I really like this filly a lot. We’ve had some issues getting her to this point. But she’s a beautiful mare.”