Anderson, IN – World Champion Bulldog Hanover traveled back to Harrah’s Hoosier Park Racing & Casino to take on nine rivals in the $315,000 Dan Patch Stakes on Friday (Aug. 12) and delivered what the fans came to see—an authoritative 1:48.1 performance in front of a packed house. Finishing under wraps with Dexter Dunn in the bike, Bulldog Hanover cruised to a 2-3/4 length victory over Rockyroad Hanover and Todd McCarthy. 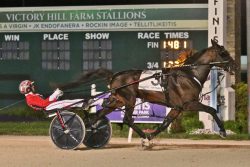 It was Bulldog Hanover’s first performance since his 1:45.4 world-record win in the William Haughton Memorial four weeks ago. With the victory, Bulldog Hanover recorded his seventh straight victory and stamped his name in the Harrah’s Hoosier Park record books.

Leaving from post three in the talented field of 10, Dunn sent Bulldog Hanover away from the gate to grab a spot along the rail in third. David Miller had Workin On A Mystery pointed to the front and they grabbed the early lead through the opening panel in :26. This Is The Plan and Yannick Gingras also left sharply to grab a pocket seat from post nine while the rest of the field sorted out early position.

Rockyroad Hanover was forced to settle for second-place honors while Workin Ona Mystery held on for third. As the 1-5 favorite, Bulldog Hanover returned $2.40 to his backers at the betting windows.

“Working with a horse like him makes my job very easy,” said Dunn. “We got away cleanly and handily, and once I moved him, I had a handful of horse. The further he seems to go, the better he is. He’s putting in these big miles and going fast times and it really doesn’t seem to be bothering him. He bounces back and does it again and again.

“No, there was never really an anxious moment,” Dunn continued. “I knew with the way he felt it was going to take a pretty big effort from one of the others to chase him down. He did it pretty easy tonight.”

Trainer Jack Darling made the trip with his stable standout and was on hand in the winner’s circle.

“He doesn’t take a lot of maintenance,” he noted. “His caretaker is with him all the time and we just try to do what we can to keep him happy. We love it here at Hoosier (Harrah’s Hoosier Park) and Bulldog likes it too. He has another start here in a few weeks so we will be back. He’s got the Canadian Pacing Derby up next in two weeks at Mohawk and then we will be back here for the Hoosier Park Pacing Derby.”

The race proved to be the perfect ending to a sensational evening of harness racing in front of a packed house for the 29th edition of Harrah’s Hoosier Park’s premier harness racing event. The evening’s 15-race card produced a Dan Patch record handle of $1,568,105 besting the total handle of $1,481,330 from 2021.

Live racing continues at Harrah’s Hoosier Park on Saturday (Aug. 13) with a 12-race card. There were no winner’s in Friday’s Hoosier-High-5 resulting in a $21,968 carryover that will be applied to a $75,000 Guaranteed Hoosier High-5 offered in race 12 on Saturday’s card.