Grove City, OH – Heavy favorites Bythemissal and Sea Silk did not disappoint as they rolled to victory to capture $300,000 Ohio Sires Stakes Championships Saturday night (Oct. 1) at Dayton Raceway.  A packed house saw the two 1-9 favorites turn in impressive performances as the team of Chris Page and Ron Burke claimed three titles on the chilly and windy night. 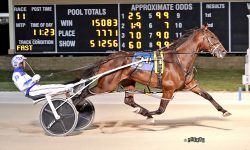 Bythemissal coming off his victory in the Little Brown Jug, sat fourth through the first three-quarters before turning on the jets at the top of the stretch to draw away and win the 3-year-old colt and gelding pacing crown.

Sling Shock with Brett Miller grabbed the early lead cutting fractions of :27, :55.3 and 1:23.2.  Chris Page sat patiently with the son of Downbytheseaside before making his move into a stiff wind on the backstretch.

Page took Bythemissal three-wide around the final turn grabbing the lead at the top of the stretch and drawing away to win by 2-1/4 lengths in 1:52.1.

The win was the 11th in 13 starts in 2022 for Bythemissal who is trained by Ron Burke and owned by the Burke Racing Stable, Eric Good, Rich Lombardo Racing, and Weaver Bruscemi.  Bythemissal raised his lifetime earnings to $983,525. Bythemissal was bred by Stephen Dey III. 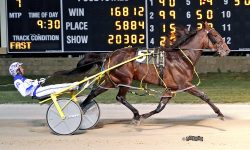 In the sophomore pacing championship for fillies, Sea Silk grabbed the lead just past the quarter in :27.3 and never looked back cruising to an easy 2-1/2 length victory in 1:52.4.  Page and Sea Silk covered the half in :56 and faced a brief challenge from Prancing Queen going up the backstretch.  As the field hit the three-quarter pole in 1:24.1, Sea Silk began to open up and cruised to victory in 1:52.4.

Do It Like Bobbi was second with Twenty finishing third.

The daughter of Downbytheseaside is trained by Burke and owned by the Burke Racing Stable, Weaver Bruscemi, Knox Services, and Hatfield Stables.  She was bred by Steiner Stock Farm.

The first of the three titles for Page and Burke came in the 2-year-old filly pacing division when McSeaside rallied down the stretch to win by two lengths in 1:53.4.

Aaron Merriman took More The Merrier to the early lead and tried to race away from the field with fractions of :26.3, :54.2, and 1:22.4 opening up a five-length lead.  As More The Merrier was running out of steam, Page took McSeaside, the even money favorite, three-wide around the final turn catching the leader mid-stretch.

Cruise Alert was second with More The Merrier hanging on for third.

The Downbytheseaside – Silk Purse filly claimed her second win of the year and raised her earnings to $220,114.  McSeaside is owned by the Burke Racing Stable, Beasty LLC, J&T Silva Stables, and Knox Services, and was bred by Andray Farm and Sergent Stables.

In the opening race of the night, world champion Rumble Strips grabbed the early lead and never looked back going gate to wire to win the 2-year-old colt and gelding trot in a new track record.  Trained by Mike Polhamus, the 4-5 favorite with Kayne Kaufman driving, cut fractions of :28.3, :58.2, 1:27.3 on the way to a one-length victory in 1:56.1.  The son of Long Tom – Lady Glider shaved a second off the five-year-old record.

Jet Hill finished second with A Real Legend getting up at the wire for third in a photo.

The win was the fourth of the year for Rumble Strips who is owned by Constance Polhamus and Mary Beth Walters, and was bred by Franklin Equine.  Rumble Strips raised his earnings to $276,135.

In the 2-year-old colt and gelding trot, Rockmelikeyameanit and Brett Miller took the pocket trip shooting down the passing lane past the leader Act Fast to win in 1:53.2.

Act Fast with Page driving held the lead through the first three quarters with fractions of :27.3, :57, and 1:24.3.  Act Fast turned for home with the lead, but could not hold on as Rockmelikeyameanit moved to the inside and drove to the line to claim victory.

Surfside Beach finished second but was placed eighth when it was ruled he went inside the pylons entering the passing lane.  Downrightdelicious was elevated to second with Racing Rampage third.

Trained by Christi Noble and owned by Dennis Owens, Norman Rae Racing and James Morris, the son of McArdle – Fast and Feisty won for the second time this year and raised his earnings to $296,153.  Rockmelikeyameanit was bred by GBW Breeding Farms.

In the 3-year-old colt trot, Caviar Gold and Aaron Merriman went to the lead through the first three quarters in :27.3, :56.4 and 1:25.2 before Longshot and Chris Lems challenged around the final turn.

The two pulled away from the rest of the field and battled down the lane with Longshot taking control in deep stretch to win by a length and a quarter in 1:54.2.

The win was the eighth of the year for the Long Tom gelding.  Trained by Scott Cox and owned by Wayne Mast Jr. and Callam Racing, Longshot raised his lifetime earnings to $309,460.  Longshot was bred by Perry Coblentz.

It was a record night for Dayton Raceway as wagering topped $1.2 million dollars.