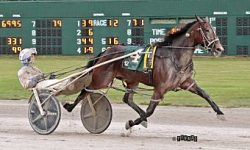 Bythemissal didn’t disappoint his backers as the 1-9 favorite in the second OSS division. Driven by Chris Page, the Downbytheseaside gelding got away fourth along the rail. After sitting patiently, the Adios champion made his move on the backside to easily march across the wire in 1:50.1. With lengths to spare, Bythemissal bested Odds On Capitalism (Brett Miller) in second while Tre Cruz (Trevor Smith) finished third.

Last year as a 2-year-old, Bythemissal only won $3,000 in a single seasonal start. Now at three, the Ron Burke trainee is not only taking Ohio by storm, but the entire nation. With an ever-growing resume, Bythemissal has bankrolled $534,750 this year with eight victories for Burke Racing Stable, Eric Good, Rich Lombardo Racing, and Weaver Bruscemi.

The sophomore held off his challengers, setting fractions in :27.2, :57.1, and 1:24.4 before stopping the clock in 1:52.1. The 3-2 favorite Sling Shock (Miller) finished second with Dragononthebeach (Tyler Smith) completing the trifecta.