Washington, PA — On paper, North America Cup winner Pebble Beach and Meadowlands Pace champion Beach Glass looked many lengths better than the rest of the field in Saturday’s (July 30) $350,000 final of the Delvin Miller Adios Pace for the Orchids at Hollywood Casino at The Meadows. But Bythemissal reminded us forcefully that an elite test for 3-year-old male pacers is not contested on paper.

Bythemissal had lost only once in his six-race career, but it was that 5-3/4-length pasting by Pebble Beach in last week’s Adios eliminations that sent bettors looking elsewhere. Page indicated that race served as a sort of an introduction to top-level competition for Bythemissal.

“Last week was the prep race,” said Page, in only his second Adios. “I was really confident in how he came out of the race and how he finished. Ronnie said he had a great week this week, so I just needed to make sure I kept him out of trouble. I got him in play a little bit, but away from the :53.4 half.” 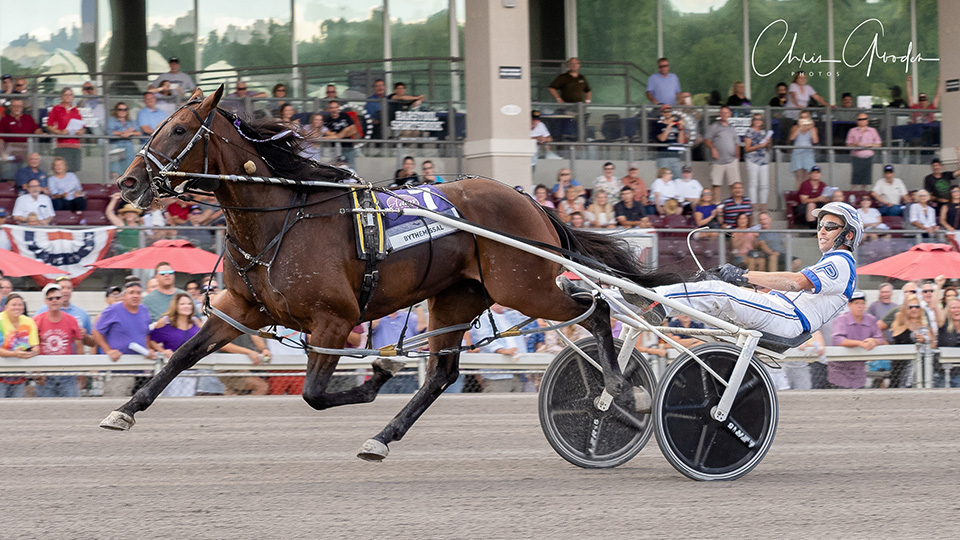 Bythemissal charged first-up from fifth on his way to a decisive defeat of pacing titans Beach Glass and Pebble Beach in the 56th Adios Pace for the Orchids. Chris Gooden photo.

River Ness, the winner’s stablemate, was determined to make for a demanding quarter but broke stride before he could fully accomplish his goal. Nevertheless, Beach Glass was forced to a blistering :25.4 panel. Yet his half time of :53.4 was only a tick faster than last week’s :54 in the slop, so it would be unfair to suggest that Bythemissal’s win was fractions-aided. Rather, Burke said he saw signs of today’s outcome in last week’s strong finish.

“We wanted to race him a little more aggressively, but it didn’t work out,” Burke said. “But you don’t make the move he made last week to finish second and not be good. You can’t be three-deep and make up ground against real good horses. Chris had him double-wrapped up at the wire. Chris is never confident, and he was supremely confident with this horse.

“At the half today, I thought if Chris can get wheeled up by the three-quarters, it’ll be on. My horse has the will to win. You get him close, he’s gonna get ya.”

It’s the second blanket of orchids for Burke, whose massive stable is based at The Meadows, as he also prevailed with Dorsoduro Hanover — still active and a double millionaire. He also was assistant trainer for his father, Mickey, when the elder Burke won the Adios with May June Character — the final win of that horse’s career. Each win, Burke said, has felt differently.

“The one with my dad is still special,” he said. “That was the one that knocked the door down for us. It’s a hard race to win. But in the others, we were favorites. People were calling this a two-horse race.”

Burke said Bythemissal probably would aim for the Carl Milstein at MGM Northfield and likely will be supplemented to the Little Brown Jug.

ADIOS NOTES: Handle for the 16-race Adios Day card surged to $1,294,602, highest total in recent memory. … Bythemissal’s time matched the track record for geldings established by Alsace Hanover . … The Burke Brigade started 23 horses on the program, well off its Adios Day record 29. “That made it a lot easier,” Burke said. “It really did.”

To watch the replay of the 56th Adios, click here.