Page, a native of Mount Vernon, Ohio, attended his first Little Brown Jug at the age of 10 in 1994 and fell in love with harness racing. He has not missed the event since then, as either a fan or driver. 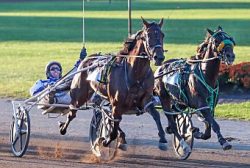 Chris Page guided Bythemissal to victory by three-quarters of a length over Fourever Boy in 1:51.1 in the 77th edition of the Jug. USTA/Mark Hall photo.

He was overjoyed his streak continued Thursday by guiding Bythemissal to victory by three-quarters of a length over Fourever Boy in 1:51.1 in the 77th edition of the Jug, presented by the Ohio Harness Horsemen’s Association. Night Hawk finished third.

“Winning the Little Brown Jug has been my dream ever since I was a little tyke,” Page said. “I feel like somebody ought to pinch me, like I’m going to wake up sometime. This (race) is what really pulled me in and made me want to drive horses and fall in love with it.”

On Thursday morning, Burke spoke at the OHHA’s Speaker Series and told the crowd he expected a winning performance from Bythemissal.

“I may eat my words, but I believe in this horse,” Burke said. “I think he’s better than these other horses. So, if he races his race today, I think he will win. I’ve become very confident in this horse because he makes you be confident.”

He added, “Obviously, I want to win, but as much for Chris and for the horse, more than for me. I want people to realize what a good horse he is, and I want Chris to experience what I have experienced. What a great race this is to win. It is maybe the best, or one of the best, races to win.”

Bythemissal’s victory gave Burke his fourth Little Brown Jug trophy, moving him into a tie for second among all trainers in history with Stanley Dancer. Billy Haughton holds the record with six. Burke became the first trainer to win back-to-back Jugs since Casie Coleman in 2012-13.

“That’s four for us; that’s pretty cool,” Burke said. “I really believed he was the best horse today. I thought he drew in a great spot, and I knew Chris would be confident enough to give him the right trip.” 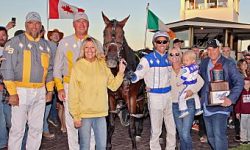 The connections of Bythemissal celebrate in the winner’s circle. Conrad photo.

The Little Brown Jug, which attracted a crowd of 42,836 including Ohio Gov. Mike DeWine, began with two $50,000 eliminations. In the first, Bythemissal took control after the opening quarter-mile and won by four lengths over Night Hawk in 1:51.3 as the 1-9 favorite. In the second, Fourever Boy, the 3-5 favorite, rallied from an early spot near the rear of the field to win by 1-1/4 lengths over Six Feet Apart in 1:51.4.

For the final, Fourever Boy, trained by Tim Twaddle and driven by Dexter Dunn, drew post one, leaving Bythemissal in post two.

Fourever Boy went to the lead off the starting gate, parking a fast-leaving Atlas Hanover on the outside, where he remained throughout the mile. Bythemissal landed in second on the inside and followed the leader through fractions of :27.1, :55.3, and 1:24.1.

“Tim Twaddle has done a good job with (Fourever Boy), and Dexter Dunn is a magician in the bike, so you never count them out. But the first elimination my horse was very well within himself, so I was very confident in him.”

Bythemissal, a son of Downbytheseaside-Dismissal, was bred by Stephen Dey III. He was not originally eligible to the Little Brown Jug, so his connections paid the $45,000 supplement fee to get into the race. His next start will come Oct. 1 in the Ohio Sire Stakes championship at Dayton Raceway.

Sent off as the 2-5 favorite in the Jug final, Bythemissal paid $2.80 to win. Completing the order of finish in positions four through eight were Six Feet Apart, Birthday, Gulf Shores, Greatest Ending, and Atlas Hanover.