Hightstown, NJ — After registering the biggest upset in Hambletonian history two weeks ago, Cool Papa Bell will head to Saturday’s (Aug. 20) $300,000 Earl Beal Jr. Memorial at The Downs at Mohegan Sun Pocono at the other end of the spectrum — as morning-line favorite.

Cool Papa Bell captured the Hambletonian at odds of 52-1 on Aug. 6 at The Meadowlands, giving trainer Jim Campbell the distinction of authoring the most unexpected results in both Hambo and Breeders Crown history. In 2020 at Harrah’s Hoosier Park, Sandbetweenmytoes won the Crown for 3-year-old male pacers by a neck over future Horse of the Year Tall Dark Stranger at event-record odds of 203-1.

Both winners were near the rear of their fields at the halfway point in the mile — Cool Papa Bell in eighth and Sandbetweenmytoes in ninth — but stormed home in the stretch to triumph in the final strides.

Cool Papa Bell emerged belatedly to upset at 52-1 in the 97th edition of the Hambletonian, for 3-year-old trotters, at The Meadowlands. Lisa photo.

“The thing with both those horses is that everything had to go right,” Campbell said. “They had to get lucky with their trips. With Sandbetweenmytoes, he never really came into the (television) screen until the last couple steps. I had no idea whether he won, or whether he was fifth or sixth, they were all across the track.

“It was the same thing with Cool Papa Bell. We kept saying he gives us a good effort, but everything has to go his way. It did, and he took advantage of it too. He put in his race. When he got clearance, he put his head down and dug in and trotted right through the wire.

“He accomplished the one thing that everybody who races a 3-year-old trotter wants to do,” Campbell added. “I hope he continues to have a good year the rest of the year, but he came up big on the right day.”

On Saturday, Cool Papa Bell will look to make Hambletonian winners 2-for-2 in the Beal. Last year was the first time in the race’s 10-year history that it followed the Hambletonian, and Hambo champ Captain Corey brought home the trophy from Pocono.

Cool Papa Bell will start from post one with Todd McCarthy in the sulky for Campbell and owner Scott Farber’s Runthetable Stables. He is 5-2 on the morning line.

“He came out of the Hambo real good,” said Campbell, who won the Beal in 2018 with Crystal Fashion. “Everything seems good with him.”

A son of Chapter Seven-Blk Thai Optional, Cool Papa Bell has hit the board in seven of eight races this season, winning four and earning $627,225. For his career, he has seven victories, four seconds and three thirds in 17 starts, good for $760,999. 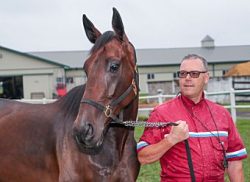 “He’s just been a real nice horse to be around,” Campbell said. “Even last year, when we raced him in the New York Sire Stakes, I would say he’s like shipping around an old racehorse. Nothing really bothers him. He knows what he’s got to do. If he does get his type of trip, he’s always been there for us. He’s got a good attitude and a great burst of speed.”

Temporal Hanover, who was beaten by three-quarters of a length in finishing third in the Hambletonian, is the Beal’s 3-1 second choice. Justice, coming off a win in a division of the Muscle Hill Trot on Hambletonian Day, is 4-1.

In the Hempt, Adios and Carl Milstein Memorial winner Bythemissal is the 5-2 choice over Meadowlands Pace and Cane Pace winner Beach Glass at 3-1. In the Lynch, Max Contract, the winner of four in a row including the Mistletoe Shalee, Tompkins-Geers, and Shady Daisy, is the 5-2 favorite.

Hambletonian runner-up Joviality S is the 5-2 favorite in the Delmonica Hanover, with Hambletonian fourth-place finisher Jiggy Jog S next at 3-1.