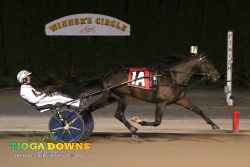 Brian Sears, who won four races on the card, guided Crown to victory in the first division of the NYSS for 2-year-old trotting colts and geldings Saturday night. Fred Brown Photo.

As they made the turn for home, the battle was for second as Crown won easily in 1:55.4. The Gruffalo (Tyler Buter) beat out Kierkegaard K for second.

Crown is a 2-year-old colt by Chapter Seven-Amour Heiress.  He is owned by S R F Stable and trained by Marcus Melander.  He is a perfect three-for three in his career.  He ran for purse only. 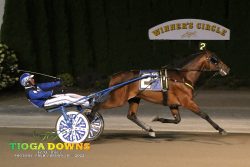 As they made the turn for home, Tillio’s Action zoomed right on by and won going away in his first career start in 1:56.3.  Cecil Hanover (Ake Svanstedt) came up late to finish second.  Sevecheetah (Trond Smedshammer) finished third.

Tillio’s Action is a 2-year-old colt by E L Titan-Nothing But Nice.  He is owned and trained by John Grasso.

Tioga Downs returns to live racing on Sunday (Aug. 14) with an 11-race card starting at 1 p.m.