Cumberland, ME — Veteran horseman Ron Cushing has done nothing but make money with his new acquisition Newsy N, a recent New Zealand import with American bloodlines. The pair handily captured the $6,500 featured conditioned pace at the Cumberland Fair on Tuesday (Sept. 27), taking a new 1:55.3 record in the process. 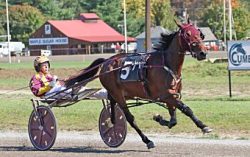 The 5-year-old daughter of Bettor’s Delight, from the Art Major mare Ultimate Art, has made just three starts since arriving in the United States this month, having raced down under in July. Previously, she won a $7,500 top class at Farmington, and was second in her first start stateside at Plainridge going for $10,000. In the Massachusetts effort the dynamic distaff was race timed in 1:52.3.

“We took a shot on her and it looks like she is going to be OK,” stated a modest Cushing.

Cushing steered Newsy N right to the top from post five in Tuesday’s opener, and never looked back. After a :57.3 back half, with a :28.4 final quarter, it is clear that the mare has some talent.

“My partner Frank (Sywyk) and I bought her about eight weeks ago. She is well bred and comes with a lot of promise. She was running-in on the turns at Farmington so we made some changes and she steers a lot better now. Kind of a work in progress, we hope she develops into a nice mare,” added Cushing.

Newsy N paid $3.20 to win for owners Ron Cushing and Frank Sywyk. She is trained by Heidi Gibbs. She was bred by Woodlands Stud NZ Inc., the top Standardbred nursery in New Zealand.

Cumberland Raceway will host a live draw of the $240,000-plus Maine Breeders Stakes 2-year-old finals on Wednesday (Sept. 28) at noon (EDT).

First Tracks Cumberland, in conjunction with the Maine Standardbred Breeders and Owners Association, and the Maine Harness Horsemen’s Association, will present the live draw before Wednesday’s regular harness racing card, which will determine the post positions of the entrants for Saturday’s (Oct. 1) four Maine-bred freshman finals.

The event will be broadcast live on the Racetrack Television Network (RTN) at noon. Representatives from First Tracks Cumberland will conduct the draw with assistance from key members of the MHHA and MSBOA.

Racing resumes Wednesday (Sept. 28). Post time is 1 p.m. for the remainder of the Fair meet, which runs through Sunday (Oct. 2).

More information can be found on our website: firsttrackscumberland.com and on our Facebook page: First Tracks Cumberland.