Kentucky champion Double Deceiver has earned $503,479 from a record of 20-9=7-0 after his victory in the fourth round of Championship action for male sophomore trotters. Amanda Stephens photo.

Golden Wall As grabbed the lead from the beginning of the mile and cut the first fraction of :29 until Rebuff assumed command. The son of Muscle Hill and Tetrick led the field of seven through a half of :56:1 and three-quarters in 1:23.4. Golden Wall As was waiting patiently in the pocket with Double Deceiver biding his time in third.

Double Deceiver and Golden Wall As simply passed Rebuff in the drive for the wire.

Bred by Steve Stewart and Oakwood Farms, Double Deceiver is by Cantab Hall and out of Sarcy. He was purchased for $17,000 at the 2020 Lexington Selected Yearling Sale by Pinske Stables and Makenna Pinske.

Double Deceiver paid $9.96 to win. The gelding was sixth in his last appearance in Championship action on Aug. 28.

The regally bred daughter of Captaintreacherous-Bedroomconfessions took control after a :28 first quarter. The filly led through splits of :56 and 1:24 prior to hitting the finish line in first place. 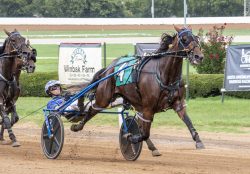 Boudoir Hanover paid $3.22 to her supporters.

Queen Of Success (Andrew McCarthy) and Just For Trix (D. Miller) won the Commonwealth divisions for sophomore male and female trotters and pacers.

Aggioranamento (Tetrick) and Fly Like An Angel (Gingras) scored in the two Golden Rod series divisions.