Yonkers, NY – The Pacing and Trotting Triple Crowns get underway for 2022 with two $40,000 eliminations of both the MGM Yonkers Trot and MGM Grand Messenger Stakes on Friday night (June 24) at Yonkers Raceway. The top four finishers from each race will advance to the finals on Friday, July 1. 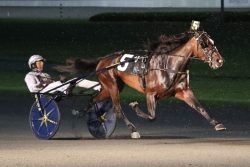 Joviality S, shown here winning at Yonkers on May 16, is one of the featured fillies in the MGM Yonkers Trot elimination. Mike Lizzi photo.

All eyes will be on the filly Joviality S (post five, Brian Sears/Marcus Melander) in the first MGM Yonkers Trot elimination, where she will face six rivals. Joviality S won in New York Sire Stakes action at Yonkers on May 16 to begin her 3-year-old season and then went to Vernon Downs and took another New York Sire Stakes leg and the Empire Breeders Classic for sophomore trotting fillies. Dover In Motion (post four, Jordan Stratton/Jamie Macomber), who has won nine of 11 career starts, invades from Indiana to tackle Joviality S.

The full elimination fields with listed drivers/trainers are as follows:

The companion filly events, the New York New York mile for trotters and Park MGM for pacers, did not require eliminations and will go right to the finals on July 1. The horses who entered are listed below:

What Should I Goo