Cumberland, ME — Three divisions of Maine-bred freshman pacers will go postward at First Tracks Cumberland on Friday (July 22) and Saturday (July 23) as the curtain closes on the Spring/Summer pari-mutuel meet at the iconic Southern Maine fairgrounds.

The winner of last week’s division, Janie (post three) is back to defend her turf. The daughter of Deuce Seelster covered the Cumberland oval in 2:00.2 in her last outing, winning by 1-3/4 lengths for driver Mark Athearn and trainer/partner Gretchen Athearn. This week the leggy lass gets the services of driver Mike Stevenson.

Her closest competitor was Pickmepickme (post four, Andrew Harrington) who will look to improve their position for trainer Marc Tardif. That Western Maverick filly has been 1-2-3 in all three of her seasonal efforts, including a 1:59.3 score at Bangor on July 6.

The entries are as follows:

Saturday brings two $11,000-plus divisions for 2-year-old pacing colts and geldings before the pari-mutuel card. Non-betting races go off at 3 and 3:15 p.m., respectively.

The Tardif task force brings out their small army for another round of the freshman follies for male pacers, with seven entries in the two early races. 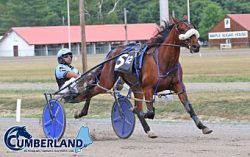 Race one for $11,433 includes the undefeated Luke McGook (post six) who has been driven by Kevin Switzer Jr. to all three of his decisive victories. The son of Rock N’ Roll World scored in 2:01 in his last appearance, stepping away from the field to win by 3-1/2 lengths.

His stablemate Facemaskrequired (post one) has been knocking on the door for several weeks now, and the Andy Harrington-driven son of Deuce Seelser gets post position help this week.

Two Towns Over (post three) also looks like a potential spoiler, as the Deuce Seelster gelding was second in his last start for driver Heath Campbell and owner/trainer Valerie Grondin.

The $11,609 second division features Twice The Ice (post four) who is one of four from the Tardif barn. Driven by Walter Case Jr., the son of Deuce Seelser has two wins to his credit, the last in 2:01.4 at Cumberland.

Tardif also sends So Rock N’ Roll (post six) into the fray, and gets a driver change to Andy Harrington. Finishing second in his last start, race timed in 2:01.3, the son of Western Maverick shows a :28.4 last quarter in his first lifetime start.

Mattucci (post one) hails from the Grondin stable and is co-owned with Gino Mattucci. The son of Western Maverick has Heath Campbell at the controls and shows consistent last quarters faster than :30.

The entries for those divisions are as follows:

The Maine Breeders Stakes moves to the Union Fair on Sunday (July 24) with the 2-year-old trotting colts and geldings, followed by all the 3-year-old divisions being raced at Union Tuesday through Thursday.