Middletown, NY – The Goshen Yearling Sale was held on Monday (Sept. 12) in the sales arena at the Mark Ford Training Center and the spotters were taking offers from a jam-packed gallery of bidders on the grounds while online bidding managed by Cattle In Motion, collected remote bids from registered users that saw a 400% increase this year.

A total of 91 yearlings changed hands generating sales of $1,838,500. And with the overall individual average sale price of $20,203 being achieved, set a new all-time record for the Goshen Yearling Sale with an increase of 17.5%. 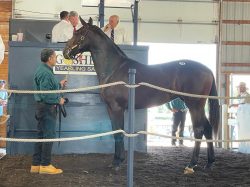 Once again Cameo Hills Farm had a big day after they sold the sale topper (Hip #74) Irish Exit (Huntsville-One Last Kiss). The pacing filly was purchased for $80,000 by Gareth Dowse of Marshalls Creek, Pennsylvania.

Leatherstocking Equine’s consignment of 18 brought a total of $300,500 for an average of $16,694 and was led by their top seller (Hip #5) Branchport, a pacing colt that brought $28,000 from Hunter Oakes of Wilkes Barre, Pennsylvania. They also sent trotting filly (Hip# 54) Nancy’s Opinion (Crazy Wow-Kasha) through the ring to Jessica Okusko of Vernon, New York for $27,000.

The Silver Tradition Stable was the agent for pacing filly Melanie’s Megan (American Ideal-Palette Tina) who sold for $41,000 to Erv Miller of Wind Gap, Pennsylvania and that was the highest price brought by any sire in the sale. It was also the only American Ideal yearling being offered on Monday.

“Here at the Goshen Yearling Sale we have been striving to make this sale better over the last several years and have implemented the changes and improvements necessary to do that. And our hard work has paid off as since 2018 our volume, sales and prices have all reached new record heights and the sale just continues to get better,” said Mark Ford. “We want to thank all of our consignors and customers both live and remote, for supporting this sale and we look forward to doing it again next year as we are already planning for 2023.”

You can view the complete Goshen yearling sales results in a searchable database by clicking this link: http://www.goshenyearlingsale.com/results/index.cgi?Limit=200