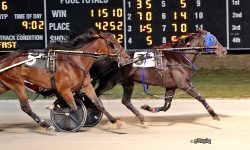 Aaron Merriman took the 1-5 favorite to the lead with fractions of :28, :57 and 1:25.2 opening up a two-length lead after three-quarters.

Turning for home, Criquette Hall and Chris Page set their sights on the leader, but Gabbys C Note fought off the challenge to win for the 10th time in 12 starts this year.

In her career, Gabbys C Note has 15 wins in 19 starts and has finished outside the top two only once.  With the win she raised her lifetime earnings to $600,778. 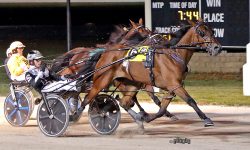 Rose Run Yolanda claimed her Triple Crown in the 2-year-old filly trot winning for the sixth time in a row.

Trevor Smith settled the 1-2 favorite into fourth place through the :28 first quarter.  Heading to the half, Smith pulled the daughter of Triumphant Caviar – Rose Run Keepsake and started her pursuit of the leader Global Girl.

Global Girl led by a quarter of a length at three-quarters in 1:27.1, with Rose Run Yolanda bearing down.

Rose Run Yolanda took control down the home stretch to win by a length in 1:57.1.

Global Girl held on for second with Swinging Senorita third.

Owned by Greg Luther Racing and trained by Todd Luther, Rose Run Yolanda has won six of seven starts this year, finishing second in the other race.  With the win she has earned $290,528 this year.  Rose Run Yolanda was bred by Rose Run Farm.