East Rutherford, NJ — Yannick Gingras came to play Friday night (Nov. 25) at the Meadowlands, and so did the 20-cent Pick-6 players.

The 43-year-old Hall of Fame pilot recorded four wins to lead the driver colony while bettors awoke from their post-Thanksgiving slumber with some huge play in the Pick-6 with motivation provided by a $100,000 guaranteed pool.

Gingras got his night rolling in the second race by guiding Portofino (at odds of 5-2) to victory lane in a non-winners of two trot for trainer Ron Burke in 1:55 despite a 41-day layoff. Gingras came right back in the next race with the Bruce Saunders-trained Texas Miki, who snuck through the inside late to score in 1:54.1 at odds of 6-1 in a TrackMaster 77 pace.

“The Green Hornet” recorded a natural hat trick by scoring with 4-1 chance Troycen for Burke in a non-winners of $3,000 trot in 1:57.1 before completing his big night with Saunders student Best Keepsake in the seventh-race fillies and mares non-winners of $3,000 pace in 1:54.4 as the 6-5 favorite. 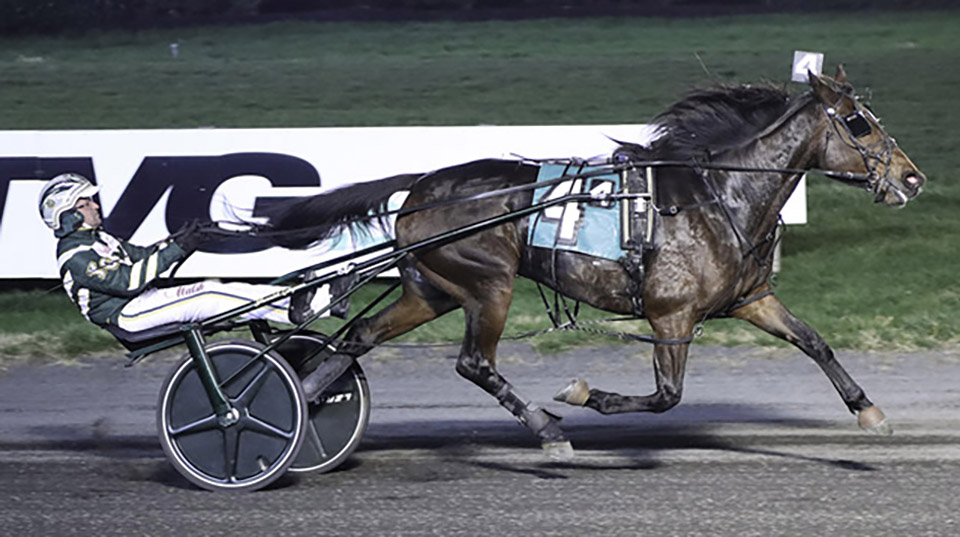 Troycen took the fourth race at the Meadowlands Friday night, one of four winners on the card for driver Yannick Gingras. Lisa Photo.

With stiff winds in their faces coming through the stretch, it was tough to make up ground, making the front end the place to be on a night that felt chillier than the 46-degree thermometer reading.

“You just pay attention to what’s going on,” said Gingras of the track bias. “You have to be close anyway, so I put my horses on the point and a few got the job done. Winning races brings confidence, and when you feel good in the bike, it definitely makes a difference.”

The 20-cent Pick-6 had a double carryover of just over $32,000, which led to Meadowlands management – in conjunction with the United States Trotting Association’s Strategic Wagering initiative – to guarantee the total pool at $100,000. What resulted was $107,218 in “new money” for a total pool of $139,648.

A LITTLE MORE: Dexter Dunn recorded a driving triple while Andy McCarthy and Corey Callahan had two wins each. … Burke and Saunders led the trainers with two winners apiece. … Despite only one horse going off at odds greater than 9-2, the 20-cent Survivor Pick-7 returned $5,833.78. … All-source handle totaled $2,891,501 as total play in the two 50-cent Pick-4 wagers totaled just under $150,000. … Racing resumes Saturday (Nov. 26) at 6:20 p.m. on “Fall Final Four/TVG Championships Night”; eight stakes events – contested as races four through 11 – will go for purses totaling $2.7 million. The marquee attraction is the presumptive Horse of the Year Bulldog Hanover, who, along with the super mare Atlanta, will make the final starts of their respective careers.