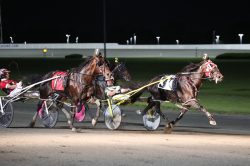 Driven by Yannick Gingras in the opening elimination, Gulf Shores left from post three and worked past Captain Cowboy (Dexter Dunn) to take over the lead before the :27.1 opening quarter. Gingras then hit the brakes in the second quarter and got to the half in just :57 seconds before picking up the tempo to 1:25 at three-quarters to deal with a bit of first-over pressure from Layton Hanover (Matt Kakaley).

Layton Hanover’s bid ended on the final turn, and he dropped back, giving Captain Cowboy space to tip out in an attempt to chase down Gulf Shores. Captain Cowboy was able to gain, but it wasn’t enough as Gulf Shores held on to prevail by a head in 1:52.4. Nautical Hanover (Todd McCarthy) sat on the cones in the three-hole and wound up third, and PJ Lou (Jason Bartlett) was able to close from last to fourth in the final quarter to secure a position in the final.

“I was very happy with him. Even with the margin, Yannick said he had plenty left,” said winning trainer Brian Brown.

In the other elimination, Pleaseletmeknow (Kakaley) made every call a winning one in a 1:52 performance. He blasted out from post four and made an uncontested lead after Market Based (Andy McCarthy) broke stride on the first turn. After stepping off fractions of :28.1, :57, and 1:24.2, Pleaseletmeknow remained clear in a :27.3 last quarter, tallying by 2-3/4 lengths over Hammering Hank (Dunn), who saved ground on the inside, angled out on the last turn, and out-kicked pocket-sitter Atlas Hanover (T. McCarthy) for second. Huntanover (Tyler Buter) was fourth.

Travis Alexander trains Pleaseletmeknow, an American Ideal gelding, for owner/breeder Fiddler’s Creek Stables LLC. These are the same connections as last year’s MGM Grand Messenger Stakes champion, American Courage. Pleaseletmeknow is now a seven-time winner from 12 trips behind the gate, he has now pocketed $231,459, he was dispatched at 5-1, and he returned $13.00. The exacta was worth $37.00 and the trifecta kicked back $143.00.

The open draw for the $259,230 MGM Grand Messenger Stakes final will take place on Monday.