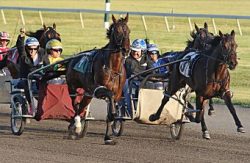 Rebecca Haarlow took the win in the first charity derby race of the night. Lisa photo.

Rebecca Haarlow, sideline reporter on MSG for the New York Knicks, NBA on TNT and NBA TV, took the win in the first charity derby race of the night. Haarlow and driving partner Tim Tetrick made a tremendous stretch move “rallying past Marc Malusis as if he was standing still” to take home the win. Haarlow’s first place finish gave her charity Rescue Dogs Rock $5,000.

The race can be viewed here.

“I’m thrilled to be able to help out Rescue Dogs Rock with this win,” said Haarlow upon her return to the winner’s circle. “This was a great night, a great experience, our family loved it.”

The second charity derby was won by SNY reporter Maria Marino and her driving partner Corey Callahan. She held off fellow competitor Pat Leonard of the New York Daily News to capture the $5,000 prize for her selected charity, the American Cancer Society.

Brandon Tierney of WFAN was scratched sick for the derby but Marc Malusis stepped in and drove in Tierney’s race, earning the St. Jude’s Research Hospital $1,000.

“I tried my best to win it for Tierney,” said Malusis in his post-race interview. “This is always a great night, my family loves coming out and visiting the paddock and rooting me on. Thank you to the Meadowlands for putting on this fun event for our great causes.”

In addition to the participating sportscasters, Meadowlands Racing & Entertainment would like to thank Mark Ford and Tony Alagna for assisting with the horses and sulkies for the event.