The 4/5 betting favorite Incaseyoudidnknow and Jim Morand took advantage of the windy conditions and rushed up to take the lead after the :28 quarter. Incaseyoudidntknow controlled the race fractions and passed the half in :56.3. 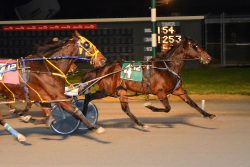 Incaseyoudidntknow is the best in the Mares Open at Dover on Wednesday night. Fotowon photo.

On Thursday(Dec. 1) Sprocket, looks to extend his four-race win streak in the Blue Hen Open Handicap Pace on race 11.