Plainville, MA — He’s been impressive since coming to Massachusetts with three wins in his last four starts. But Jimmy Connor B still had more to show and evidence of that came in the $17,500 pacing feature at Plainridge Park, where he won easily on a Tuesday afternoon (Sept. 27).

Driver Nick Graffam got away seventh from post seven with Jimmy Connor B while Ucanttouchthis (driven by Brett Beckwith) went to the quarter in :26.2 and parked Always A Miki (Kevin Switzer Jr.) from the three-eighths to the three-quarters. Jimmy Connor B, who was third-over in the other flow, swung three-deep halfway up the backside and swooped the field in a :27 third panel before heading into the last turn. He took a 1-1/2-length lead into the stretch and then Jimmy Connor B just cruised home to a 3-1/4-length romp in a lifetime mark of 1:50. 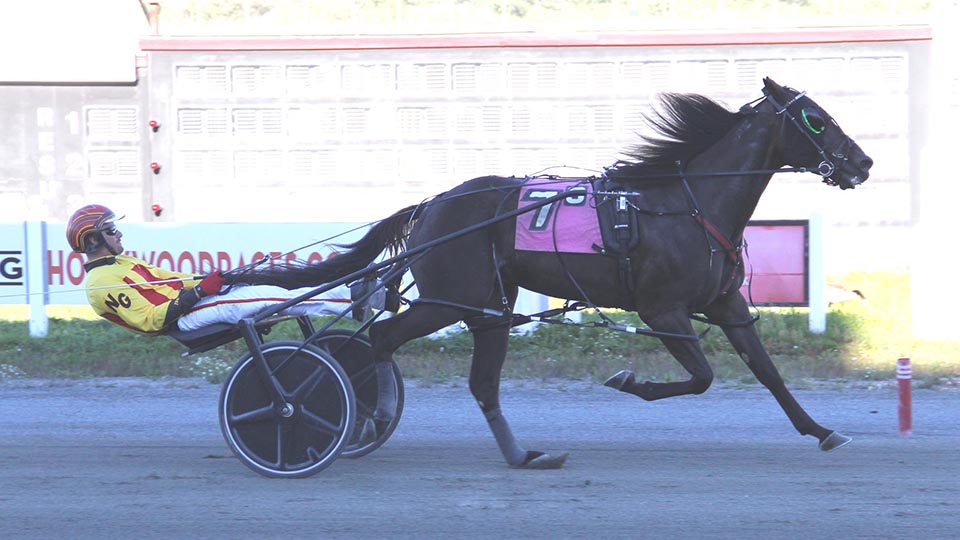 Jimmy Connor B vaulted off cover and drew clear to a 1:50 score in Plainridge Park’s Tuesday feature. Tom Melanson photo.

Jimmy Connor B, who paid $4.60 to win, got his 10th career win for owners Triple D Stables, M G Stable, Toby Rekoon and Frank Canzone. This was one of two winners for trainer Melissa Beckwith on Tuesday as she also scored with Little Willy ($20.00) in a lifetime best 1:51.3.

Driver Kevin Switzer Jr. and trainer Elisha Lafreniere had a huge afternoon at Plainridge after they teamed up for a natural hat trick in races three, four and five. They won with Colonel Bayama (1:53.3, $4.80) and Bag Pipe Major (1:52.4, $7.00) before taking the co-feature with Mansome ($10.00), who brushed late to win by a length in 1:51.3. Lafereniere also had two second-place finishes and a third from her six entries, giving her a stellar .741 UTR for the day.

Live racing resumes at Plainridge Park on Thursday afternoon (Sept. 29) at 2 p.m. Free full past performance race programs for all live race days can be downloaded by visiting the track’s website.