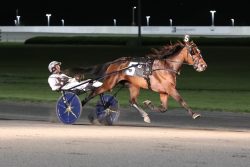 The lone filly in the MGM Yonkers Trot, Joviality S (Brian Sears) was in command through fractions of :28.1, :58.2, and 1:25.4 in the first elimination, successfully dealt with a wide first-over bid from Dover In Motion (Jordan Stratton) in the middle-half of the mile, and held serve over a closing Pour Mea Double (Dexter Dunn) to score by a length and a quarter in 1:54. Slay (Tim Tetrick) was up for third, and Brave By Design (Joe Bongiorno) was placed from fifth to fourth after Dover In Motion made a late break and was lapped-on at the wire.

“She was a little bit aggressive tonight,” remarked Sears. “She finished within herself, and I was very happy with her. The track wasn’t like the first night she raced here; it was a little cuppy inside.”

Marcus Melander trains Joviality S, a daughter of Chapter Seven, for owner Courant Inc., whose AM Bloodstock Inc. was the breeder. Joviality S is four-for-four in the win column this year, she has 13 career victories from 16 appearances, and she has now earned $1,065,366. She paid $2.10 across-the-board as the 1-9 favorite and was atop a $12.80 exacta and a $63.00 trifecta.

Justice (Ake Svanstedt) trotted to the front from post four in the other elimination and was unchallenged through stations of :29.2, :58.2, and 1:26. Pocket-sitter Double Deceiver (David Miller) took a two-wide shot at Justice in the lane, but Justice had plenty left and scored by a length and a quarter in 1:54.1. Robertsin (George Brennan) followed in the three-hole and held third over Saverio Hanover (Dunn).

A Chapter Seven colt, Justice is trained by Svanstedt and also co-owned by him in partnership with Little E LLC., Torbjorn Swahn Inc., and Myfab Inc. Justice, bred by Diamond Creek Farm, has three triumphs in four starts in 2022, has tallied six times in eight lifetime starts, and pushed his bankroll to $252,130. The 3-5 choice, Justice returned $2.90 to win and keyed a $4.30 exacta and an $11.40 trifecta.

The open draw for next Friday night’s (July 1) $280,904 MGM Yonkers Trot final will occur on Monday.