Akron, NY — After he won with Yankee On The Move in the first race at Buffalo Raceway on Sunday (June 26), Kevin Cummings eclipsed the $20 million mark in career driving earnings. 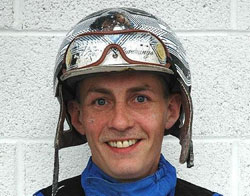 “It’s a big milestone and it felt good to get there. Especially while racing exclusively in western New York my whole career where the purses were pretty small for a long time,” said Cummings. “I learned the business from my father, John Cummings, and if it weren’t for him I would have never have been able to achieve this.”

When the dust settled on Sunday, Cummings won three races and finished second in two more, bringing his current earnings total to $20,020,202.

Cummings first started in the business grooming for his father — who was a long time trainer and driver — while in school and eventually started driving at age 18. After taking a few years to get established, Cummings’ career really started to take off as a catch driver in 2000 and from there he never looked back. He became one of the best in western New York, winning multiple dash titles over the years. From 2009 to 2018 Cummings’ annual earnings topped $1 million each year and he just missed that mark again in 2021.

Cummings has spent his entire 34-year career in western New York and has excelled in both overnights and New York Sire Stake competition during that time, earning him the respect of everyone he has competed against.