Plainville, MA — As a relentless two-day rain continued to fall, the speed strip at Plainridge Park was still producing outstanding miles. Adashious Hanover was proof of that after she recorded the mile of her life in the $15,000 distaff pacing feature on Tuesday afternoon (Sept. 6).

The track was rated “wet-fast” and so was Adashious Hanover, who left from post four with Luke Hanners at the lines. After Adashious Hanover got to the quarter in :26.3, favorite Probert (Brett Beckwith) made a power play for the front as they approached the stands and had the lead before hitting the second turn. Tonnianne (Bruce Ranger) made a first-over move heading up the backside and drew alongside the pocket-sitting Adashious Hanover, but was unable to reach the leader.

Positions remained unchanged as they hit three-quarters in 1:23.2, but shortly after that station, Tonianne broke in the turn, enabling Adashious Hanover to leave the pylons. As they headed into the stretch, Probert and Adashious Hanover matched strides all the way to the wire, where Adashious Hanover got the advantage and won by a length in a new lifetime clocking of 1:51.1. 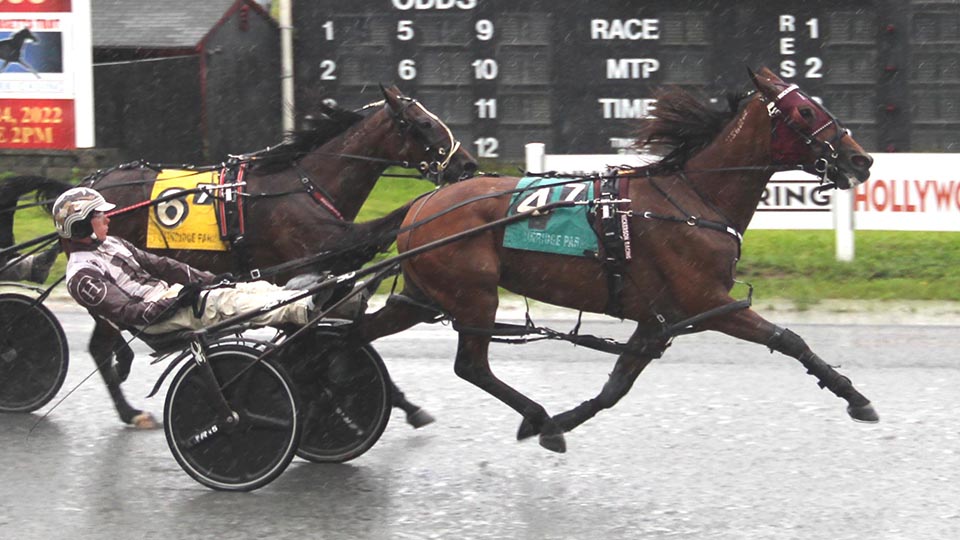 Adashious Hanover rallied from the pocket to score a lifetime mark in the Tuesday distaff feature at Plainridge Park. Tom Melanson photo.

Adashious Hanover, who paid $13.80 to win, recorded her sixth win of the year and pushed her seasonal earnings to $88,360 for owners Marc Reynolds and Rick Cortese. Jimmy Nickerson trains the winner.

Plainridge also hosted the $15,000 Nauset Light for 2-year-old pacers, some of whom are getting ready for the Massachusetts Sire Stakes, which start later this month. Hey Junior (Ron Cushing) followed the cover of Race Eye (Nick Graffam) past the half and caught the leading West Edge West (Brett Beckwith) to win by a half length in a lifetime best 1:56. Hey Junior, owned by Kevin Sywyk and his driver Cushing, is trained by Heidi Gibbs and paid $13.20.

Another Massachusetts-eligible winner on Tuesday was the 3-year-old pacer Believe Its Lindy (1:55.4, $2.10), who led every step of the way for driver Bruce Ranger and won by 1-1/4 lengths. Domenico Cecere trains for owner Lindy Farms of Connecticut.

The off going also produced some major upsets during the card, and long shot players went home happy at the end of the day. In the eighth race, Sweet Charlie (Matty Athearn) took an overland route to a lifetime best 1:53.1 victory and returned $177.60 for the win. In the sixth, Virgin Boy (Drew Campbell) found room late and brushed to a new lifetime mark of 1:55 and returned $70.80 to his backers. That win also triggered a single winning ticket in the Wicked Hi-5, with a 8-5-2-3-1 combination returning $3,797.38 on a 20-cent wager.

Live racing resumes at Plainridge Park on Thursday afternoon (Sept. 8) with post time at 2 p.m. Free full past performance race programs for all live race days can be downloaded by visiting the track’s website.