Cumberland, ME — Two divisions of 3-year-old pacers went postward during the Cumberland Fair week, with a familiar face and a new star making headlines on Wednesday (Sept. 28) in the $18,000-plus Maine Breeders Stakes.

Deal With It Roman (Walter Case Jr./Marc Tardif) vaulted to the top of the leaderboard with his wire-to-wire score in the $18,554 MSBS 3-year-old colt and gelding pace. The son of Western Maverick left from post three and was guided through comfortable fractions of :29.1 and 1:00.2 in the opening panels. 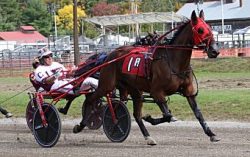 Deal With It Roman became the leading 3-year-old Maine-bred pacing colt with his Wednesday triumph at Cumberland. Stephanie Gray photo.

Tardif’s homebred Deal With It Roman was tied for second place at 287 points in the divisional standings with Bandolito Blaze (Heath Campbell/Valerie Grondin) leading into the race. Campbell put his mount into motion and began the outer flow moving into a 1:29.3 third stanza, and was just a half-length from the leader. Case tapped the accelerator and pushed his charge into another gear and sped away from the pack to win by 1-1/2 lengths in 1:59. Daughtry (Ron Cushing/Heidi Gibbs) finished second; CBF Squirt Gun (Nick Graffam/David Crochere) was third.

Owned, trained and bred by Marc Tardif, Deal With It Roman (as part of an ownership entry) paid $3.40 to win for the sixth time this season and passes Use Yah Blinkah in the point standings to take the lead.

Cowgirl Rides Again upset the favorite Sweet Baby G to win the $18,972 MSBS 3-year-old filly pace, and picked up her first lifetime victory in the process.

Driven by Shawn Thayer from post three, the daughter of Baron Biltmore sat a perfect two-hole trip behind the favorite to tip out in the lane and win by three parts of a length in 2:00.3. Sweet Baby G (Walter Case Jr./Fred Ward Jr.) finished second; Sheza Rebel (Andy Harrington/Marc Tardif) was third.

First Tracks Cumberland, with cooperation from the Maine Standardbred Breeders Association and the Maine Harness Horsemen’s Association, hosted a live draw of the $240,000-plus Maine Breeders Stakes for the 2-year-old divisional finals to be held on Saturday (Oct. 1). The entries can be viewed here.

Racing resumes Thursday (Sept. 29) with two divisions of the Maine Breeders Stakes for 3-year-old trotters, with one early non-betting race for distaffs at 12:15 p.m. Regular post time is 1 p.m. for the remainder of the Fair meet, which runs through Sunday (Oct. 2).