Plainville, MA — After a slow start, Marquis Lafayette finished fast — and first — in the $17,500 featured trot at Plainridge Park on Thursday afternoon (June 30). 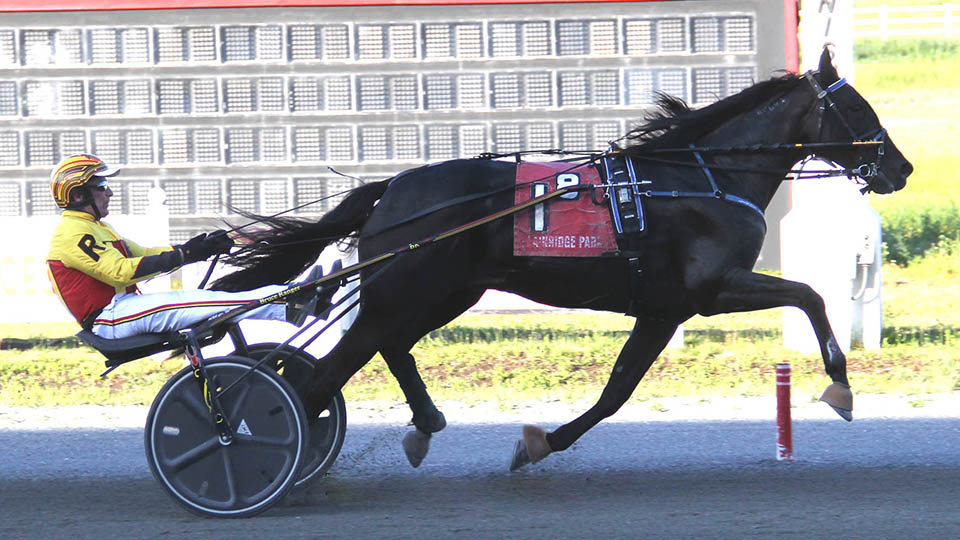 It was the fourth win of the year for Marquis Lafayette ($3.20), who is owned by Greathorse and trained by Domenico Cecere.

Ranger and Cecere also teamed up to score with Goodashim, who tripped out behind Doc Goldenfleece until the top of the stretch. There, he shook loose and brushed to the line first by a half length in 1:56.2. Goodashim ($3.00) is also owned by Greathorse along with Robert Rudolf, David Reid and Christina Takter.

The fastest trot of the day was registered by Blue Knight (Ivan Davies), who made a substantial class drop pay quick dividends as he took the lead just past the quarter and then went unfettered to wire, where he won by 1-3/4 lengths in a lifetime best-tying 1:54. Blue Knight ($2.80) is owned and trained by Richard Mason Jr.

The largest win mutuel of the meet was paid out on Thursday after 50-1 shot Neverdie (Ron Cushing) found racing room late and trotted away to a three-quarter-length victory in 1:57.3. It was the second straight win and 49th of his career for Neverdie ,who paid $102.00 to win. Mike Graham, Steve Wilson and trainer Mike Cushing own the big winner.

Live racing resumes at Plainridge Park on Monday afternoon (July 4) with post time at 4 p.m. Free full past performance race programs for all live race days can be downloaded by visiting the track’s website.

On Thursday (July 7), Plainridge Park will welcome author Amber Sawyer to the track for a signing of her latest book, Love To Race. It’s a children’s book telling a story through the eyes of retired Standardbred racehorse Derek Bromac N.

The Standardbred Owners of Massachusetts will sponsor the distribution of free signed books to the first 20 kids — age 12 and under — who attend the live races at Plainridge that day and come down to meet the author. Each child must be accompanied by an adult in order to request a free book. The book signing will start at 3:30 p.m. in front of the grandstand near the winner’s circle. Copies of the books are $15 each.