Cumberland, ME — Friday’s (June 24) eighth race at Cumberland may very well be as exciting as the blockbuster motion picture Top Gun Maverick. 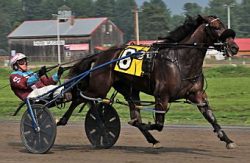 Call Me Maverick was the leading 3-year-old male pacer in the state of Maine in 2021. Stephanie Gray photo.

Last season’s top 3-year-old male pacer in the state of Maine, Call Me Maverick was assigned post one (Mike Stevenson) against arguably the fastest ‘top gun’ pacers to be assembled in the Pine Tree State this year.

“This is the toughest group of horses that we have ever had in one race here at Cumberland,” noted race secretary Marc Reynolds. “This is going to be one heckuva mile.”

Taking into consideration last week’s track record-breaking performance by Hespoisedtopounce A (post five, Kevin Switzer Jr.), pitted alongside Captain Nash (post four, Bruce Ranger), who won himself out of local participation during April and May, the race is shaping up as a ‘who’s who’ of local power brokers.

Rounding out the field is Nagle (post three, Dan Deslandes), who has been 1-2 in his last five starts in similar company, and Roll With Dom (post two, Drew Campbell), who comes into this race off a win in the class below.

With three-quarters of a million in combined lifetime earnings, the $6,500 Open II Pace reads more like a local invitational, with all of the most accomplished ‘downeast’ talent in town for the showdown.

Friday’s card has a total of 11 races on the program, and one early non-betting race, which includes two divisions of the Maine Standardbred Breeders Stakes for 3-year-old trotters.

Racing continues Saturday (June 25) with 12 races on the card, including another exciting round of the the Maine Amateur Driving Club sponsored by Blue Seal Feeds, along with a $5,500 Open III Trot boasting a very competitive field of over-achievers.

The final race on both Friday and Saturday features our 20 cent Hi-Five (Pentafecta), with a low takeout of 16 percent.

Next week, First Tracks Cumberland will host Family Fun and Value Day at the iconic Southern Maine oval. On Saturday (July 2) fans can enjoy a meet and greet with their favorite harness drivers, specials on food and drink, as well as our inaugural Cumberland Derby where fans can enter to win $500 in total cash prizes based on their picks and the official order of finish in the designated race. Giveaways and a big day of harness racing will also be provided.