Hightstown, NJ — One day after it was announced that trainer Jack Darling was a member of the Canadian Horse Racing Hall of Fame’s Class of 2022, the conditioner was discussing his pacing star Bulldog Hanover and their time this week at Lexington’s Red Mile as they prepare for Sunday’s Allerage Open Pace.

“His week is going good,” Darling said. “Everybody is coming around to look at him, a lot of media, so he’s been busy. But he seems to like it.”

When it was asked if he was sure people were coming to see Bulldog Hanover and not the new Hall of Famer, Darling laughed. 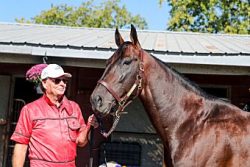 Bulldog Hanover, the unanimous No. 1-ranked horse in North American harness racing and owner of an 11-race win streak, brings his world-record speed to the Red Mile for Sunday’s $153,000 Allerage.

In the past three months, the 4-year-old pacing stallion has recorded four of the sport’s eight-fastest miles ever, including the all-time mark of 1:45.4 on July 16 at The Meadowlands. He is the 6-5 morning-line favorite in a field of seven and will start from post five with Dexter Dunn in the sulky.

“I trained him a little bit (Thursday morning), and everything seems fine,” Darling said.

Bulldog Hanover has won 12 of 13 races this year and earned $1.14 million for owners Darling and Brad Grant. For his career, the son of Shadow Play-BJ’s Squall has won 26 of 34 starts and banked $1.9 million.

During his 11-race win streak, Bulldog Hanover has not seen a horse within one length of him at the wire. He has won his past two starts by a total of 10-1/4 lengths.

The Red Mile has been the site of numerous world records over the years and Bulldog Hanover could take aim at lowering his all-time mark.

Darling, an O’Brien Award-winning trainer who resides in Ontario, has been involved in harness racing for more than three decades and won more than 1,100 races. News of his Hall of Fame honor was announced Wednesday.

“That hit me like a ton of bricks,” Darling said. “I hadn’t been thinking about it, but that was a big thing for me. When things are going good, they’re going good.”

The Allerage Farms Open Pace is race 11 on Sunday afternoon’s 12-race card, which begins at 1 p.m. The card also features the Kentucky Futurity and Kentucky Filly Futurity, as well as Allerage stakes for older male trotters and older female trotters and pacers. In addition, there is the Tattersalls Pace for 3-year-old pacers and Glen Garnsey for 3-year-old female pacers.

Atlanta continues her farewell tour in the $57,000 Allerage Mare Trot. She is the 3-2 morning-line favorite ahead of When Dovescry at 8-5. The 7-year-old Atlanta, who will be retired at the end of the Grand Circuit season, has won 36 of 75 races and earned $3.41 million in her multiple Dan Patch Award-winning career.

Test Of Faith, the 2021 Horse of the Year, is the even-money favorite in the $73,000 Allerage Mare Pace. She has finished no worse than second in 39 of 40 career races, winning 31. The 4-year-old brings a three-race win streak to the Allerage as she looks for her 10th victory in 16 starts this season.

Cuatro De Julio is the 2-1 favorite in the $149,000 Allerage Open Trot. His wins this season include the Charlie Hill Memorial last month.

In the Tattersalls, I Did It Myway is the 7-2 favorite. He has won five consecutive starts, including the Kentucky Championship Series final and a division of the Bluegrass Stakes.

The $205,000 Glen Garnsey finds Sea Silk the 3-1 favorite in a field of 11. She is coming off a victory in the Ohio Sire Stakes championship. Kentucky champ Boudoir Hanover, who starts from the trailing position, and recently returned Dan Patch Award-winner Niki Hill are the second choices at 9-2.

Editor’s Note: To watch a USTA produced video with Bulldog Hanover and his connections, click here.