Wilkes-Barre, PA – Milieu Hanover had to battle a combination of a sloppy track, a first-over journey, ad favored pacesetter Scarlett Hanover, but she proved herself much the best in the $17,500 featured distaff pace on Monday (Sept. 19) afternoon at The Downs at Mohegan Sun Pocono, winning by three lengths in 1:52.2. 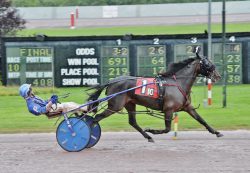 Milieu Hanover strides through the slop en route to victory in the Monday feature at Pocono. Curtis Salonick photo.

Jim Pantaleano kept the winning daughter of Betting Line off the early battle, which saw Scarlett Hanover emerge on top past a :26.4 quarter. Going onto a strong headwind, Scarlett Hanover took a breather to the :55.3 half, but then had to sharpen the speed as Milieu Hanover steadily made-up ground on her to the 1:23.2 three-quarters.

Instead of a classic far turn duel between two favorites, the battle the rest of the way was all Milieu Hanover as she drew away, with Audra Day clearing from the pocket to get second ahead of Major Battle, with the favorite fading to fourth. For Milieu Hanover, it was her second win in a row, both over off tracks at Pocono, and she increased her earnings to $251,128 for trainer Nicholas Devita and the ownership of Devita Racing Stable Inc., David Hamm, and Christopher Giaccio.

The $17,000 distaff co-feature also featured a repeater over an off track in the So Surreal mare Think Of Galaxies, a heavy favorite who controlled the pace and scooted clear by 3-3/4 lengths in 1:53.2. The meet’s leading driver and trainer, Matt Kakaley and Ron Burke, are the team behind the winner of $262,165, who is owned by Burke Racing Stable LLC and Weaver Bruscemi LLC in partnership with Peter Kleinhans.

The Pocono racing week wraps up on Tuesday (Sept. 20) with a 1:30 post time. Program pages for all Pocono races are or will be available at https://www.phha.org/downsmsppps.html.