Batavia, NY — Following his stellar outing of Friday (Sept. 30) at Batavia Downs, driver Jim Morrill Jr. bounced back with another unbelievable performance on Saturday (Oct. 1) as he won five more races including the top two paces. 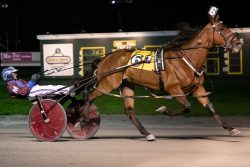 Rebellious took down the feature at Batavia Downs Gaming on Saturday, one of five wins for Jim Morrill Jr. Wendy J. Lowery Photo.

The $15,000 Open I Handicap went to Morrill and Rebellious, who got away fourth as Just Plain Loco (Dave McNeight III) took the field to the half in :55.4. There, Morrill made a second-over move following Surfer Beach (Greg Merton) who got it in gear heading into turn three. Surfer Beach cleared at three-quarters and Rebellious then followed him again to the top of the stretch. Heading down the lane Rebellious tipped out and got rowdy. He paced right by Surfer Beach and got home on top by 2-3/4 lengths in 1:53.2.

It was the third win in a row, tenth win of the year and 65th lifetime victory for the half-million-dollar earner Rebellious ($4.40) who is owned by his trainer Mike Deters in partnership with Joel Warner.

Then in the $14,000 Open II Handicap Morrill took the garden spot with Mississippi Rabbit behind American Trademark (Keith Kash Jr.) to the half in a very tepid :59.2. The slow-going forced Stop Action (Shawn McDonough) to brush and crush to the lead up the backstretch and open up a three-length lead heading into the stretch. But Morrill rousted Mississippi Rabbit and highlined him all the way home to a one length win in 1:55.2.

It was also the third win in a row for Mississippi Rabbit ($4.70) who is owned by Rocco Stebbins and trained by Joe Skowyra.

At the start of this racing week, Morrill was 12 races behind Kevin Cummings for the dash lead at this meet. Now after only three days of racing he has closed that gap to three. Cummings currently sits with 78 wins and after Saturday’s action Morrill now has 75.

Morrill wasn’t the only one winning races. Drivers Drew Monti, Dave McNeight III and Greg Merton each had two wins on the card as did trainers Chris Naedele and Maria Rice.

Live racing resumes at Batavia Downs on Wednesday (Oct. 5) at 6 p.m. Free full past performance race programs for all live race days can be downloaded by visiting the track’s website at bataviadownsgaming.com and clicking the “Live Racing” tab and then you watch all the races live on the Batavia Downs YouTube channel.