Hightstown, NJ — Pebble Beach will return to the races for the first time since his Pepsi North America Cup victory five weeks ago by facing five foes in Saturday’s second of two $25,000 eliminations of the Delvin Miller Adios Pace for the Orchids for 3-year-old male pacers at Hollywood Casino at The Meadows.

The top-four finishers in each elimination, along with the fifth-place finisher with the higher career earnings, advance to the $350,000 final July 30.

Pebble Beach, who was ineligible to race in this month’s Meadowlands Pace because of the Meadowlands’ rule prohibiting first-crop foals of stallions that retired to stud at age 4 without a medical exemption from being nominated to stakes at the track, won a qualifier in 1:51.2 at The Meadowlands on July 9 in preparation for a busy stretch of his schedule.

“He seems good,” trainer Noel Daley said. “I didn’t want to qualify him a week out (from the Adios) because after this he’s got something every week. It was good he had a little break. Well, it wasn’t good he wasn’t in the Meadowlands Pace, but in the whole scheme of things, it was good he had a break. From here on in, his schedule is pretty busy provided he’s OK. I’m happy with him.” 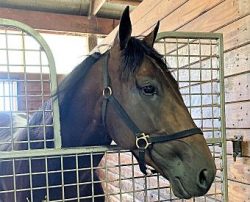 Pebble Beach has won three of four races this year. Lifetime, he has hit the board in all 15 of his starts, winning 10. USTA/Ken Weingartner photo.

Pebble Beach, a son of Downbytheseaside-Santa Rosa, has won three of four races this year. Lifetime, he has hit the board in all 15 of his starts, winning 10. In addition to capturing the C$1 million North America Cup, his triumphs this year include a division of the Somebeachsomewhere Stakes and last year’s Kentucky Championship Series final and a division of the International Stallion Stakes.

In the North America Cup at Woodbine Mohawk Park, Pebble Beach defeated Beach Glass, who won the Meadowlands Pace last weekend and is in the first Adios elimination, by 2-3/4 lengths in 1:50. It was the first time since Tell All’s victory in 2007 that the Cup winner did not go faster than 1:50.

“He was good up there the whole time. It was obvious pretty early that it was his to win or lose. He was the best of them. (Beach Glass) has the license to improve; he hasn’t done much racing, so he might keep getting better. But he was never catching him that night.”

Daley trains Pebble Beach, who is known around the barn as “Bam Bam,” for owners Patricia Stable, Joe Sbrocco, Country Club Acres, and Laexpressfoderadeovolente. The colt was purchased for $85,000 at the 2020 Lexington Selected Yearling Sale. His second dam is Hall of Fame broodmare Art’s Vintage, who produced millionaires Vintage Master and Great Vintage.

One especially notable bonus to Pebble Beach’s trip to the North America Cup was that Daley came back from Canada with 4-year-old pacer Bulldog Hanover, who was being sent to the U.S. by trainer/co-owner Jack Darling to race at The Meadowlands. All Bulldog Hanover did, of course, was win in consecutive weeks in 1:47, 1:46, 1:46.1, and finally in 1:45.4 to establish the record for the fastest mile in history.

“It was a matter of being in the right place at the right time,” Daley said about getting Bulldog Hanover, who this week returned to Darling’s stable. “He was fun to have. He was a very simple horse to do anything with.

“To do what he did four weeks in a row is mindboggling. It’s crazy.”

The Adios eliminations are races eight and nine at The Meadows on Saturday. Racing begins at 12:45 p.m. (EDT). For free programs for The Meadows, visit the Meadows Standardbred Owners Association website here.

Here are the Adios elimination fields in post order, with drivers (before changes) and trainers: