Lexington, KY – The best of the Bluegrass State will be out in force on Sunday (Sept. 18) as The Red Mile will play host to the Kentucky Sires Stakes (KYSS) Championship card. The historic racetrack in Lexington, Ky. will offer total purses of $3.4 million, with eight $400,000 Championship finals and a pair of $100,000 Commonwealth finals comprising the 10-race program that gets underway at 1 p.m. 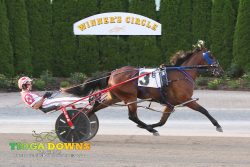 Twin B Joe Fresh, here winning a NYSS at Tioga Downs in July, is the 2-1 morning line favorite in Saturday’s $400,000 KYSS Championship for 2-year-old filly pacers at The Red Mile. Fred Brown Photo.

Twin B Joe Fresh, who captured the $200,000 New York Sires Stakes final for 2-year-old filly pacers last Saturday (Sept. 10) at Tioga Downs, will attempt to take down similar honors in the $400,000 KYSS Championship event, slated as race nine on the card. Listed as the 2-1 morning-line favorite, Twin B Joe Fresh will start from post six in the 10-horse field with Dexter Dunn–who also shares ownership–in the sulky.

The Chris Ryder trainee had three wins in four NYSS events and she has a first and second in two KYSS starts. Her 1:48.4 effort in her KYSS start on Aug. 14 was a career best and just missed Warrawee Ubeaut’s world record for her division by just one-fifth of a second.

Ryder purchased Twin B Joe Fresh as a yearling for $65,000 from breeder Brittany Farms, sharing ownership with driver Dunn, Peter Trebotica and Barry Spak. Coming into Sunday’s KYSS final, Twin B Joe Fresh has returned $264,412 to the partners, with an overall record of five wins and two seconds in seven starts.

“I loved the pedigree,” Ryder said. “When I saw her it was a little bit of a no-brainer. I had to get her once I saw her.”

Ryder said it is hard to compare Twin B Joe Fresh to Bettor’s Wish.

“There are not really any similarities to Bettor’s Wish except if you look at the breeding page. The only thing wrong with her is that I can’t breed her to Bettor’s Wish,” he said with a laugh.

Twin B Joe Fresh began her career with a victory in a Geers division on June 17 at The Meadowlands with Dunn driving. She then won a pair of NYSS contests at Saratoga and Tioga Downs with Jason Bartlett in the sulky, before heading to Lexington where she then made her two KYSS starts with Dunn aboard. Then shipped back to Vernon Downs for a NYSS contest, Twin B Joe Fresh finished second again for Bartlett, before Dunn directed her to her 1:50.4 score in the rich stakes final.

“She’s very good shipping,” he said. “She shipped to Lexington on Monday (Sept. 12) after racing on Saturday. And I’ve freshened her up for Sunday.”

Ryder said Twin B Joe Fresh is not Breeders Crown eligible so her first year of racing will conclude with the KYSS final and then the International Stallion and Bluegrass during the upcoming stakes meet at The Red Mile.

“She’s done nothing wrong,” said Ryder. “I think she is a pretty exciting filly and I’m thrilled to have her. Everything has gone well and she’s had no problems.

“She has no Breeders Crown but she has the two Grand Circuit races in Lexington. That will give her 10 starts. Then I will put her away for next year.”

Eternal Lee, a daughter of Southwind Frank, finished second (for trainer Julie Walker) in last year’s KYSS final to Selfie Queen, and the pair will match up again on Sunday.

Selfie Queen, driven by Dunn for trainer Nancy Takter, will start from post three as the 3-1 program choice, while Eternal Lee and driver Andrew McCarthy is listed as the 7-2 second choice from post one.

Eternal Lee had two firsts and a fifth in the Championship Series preliminaries this year, including a career-best 1:51 score on Aug. 23 at odds of 17-1. Eternal Lee is owned by Murray Ferguson Jr. and brings a career bankroll of $258,138 into Sunday’s race.

Walner Payton wasn’t as fortunate at the draw as the daughter of Walner will start from the outside post nine with Dunn driving. Owned by Ken Jacobs, Walner Payton has two wins, two seconds and a third in seven starts this year, with one of those being a career-best 1:54 effort in the $240,000 New Jersey Sires Stakes final on July 22 at The Meadowlands.

“We’ll give it the best shot we can from out there,” said Ryder, noting the outside starting spot.

Ryder has a fourth starter in action on Sunday in Lous The Attitude, who starts from post five in a five-horse $100,000 Commonwealth Series final for 2-year-old male pacers. Dunn will drive Lous Attitude, who has two seconds to show for seven career starts for owners Let It Ride Stables, Maurice Chodash and Barry Cohen.

To see the entries for the entire Sunday program, click here.