Hightstown, NJ — PJ Lou never gets caught napping at the start of a race. The 3-year-old male pacer has been worse than second at the quarter-mile point in only three of 18 lifetime starts and has been worse than third at the half just once — in his career debut.

And while he might not always convert his early position into wins, it’s been enough to earn a paycheck 15 times, adding up to $142,631 for his connections.

“He’s not a superstar, but he’s a nice, handy horse,” trainer Mark Harder said. “That’s his best attribute, and because he’s handy he can get himself a good spot and give himself a chance to get money, especially on the smaller tracks.” 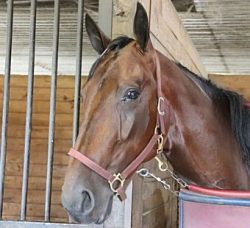 PJ Lou’s next chance will come Friday in the first of two $40,000 eliminations of the MGM Grand Messenger Stakes for 3-year-old male pacers. USTA/Ken Weingartner photo.

PJ Lou’s next chance will come Friday in the first of two $40,000 eliminations of the MGM Grand Messenger Stakes for 3-year-old male pacers at half-mile Yonkers Raceway. The gelding will start from post six in a six-horse field with Jason Bartlett, the Hilltop’s leading driver, in the sulky.

The Messenger is the first jewel in the Pacing Triple Crown, followed by the Cane Pace on Aug. 6 at The Meadowlands and Little Brown Jug on Sept. 22 at the Delaware County Fair in central Ohio.

Gulf Shores, last year’s Ohio Sire Stakes champion and runner-up by a nose to Monte Miki in the Breeders Crown, is the first elim’s 2-1 morning-line favorite. He will leave from post three with Yannick Gingras driving for trainer Brian Brown. The top-four finishers from each elimination will advance to the July 1 final at Yonkers.

PJ Lou, who has three career wins and 11 top-three finishes, is 6-1 on the morning line. He enters the race off a second-place finish in a division of the Pennsylvania Sire Stakes on June 8 at Harrah’s Philadelphia. The effort followed a fourth in a PASS split May 30 at The Downs at Mohegan Sun Pocono.

“He disappointed me at Pocono a couple weeks ago, and then he bounced back at (Philly) and was real good,” Harder said. “He’s just funny that way. That’s just him. He has a bad day, and you don’t really know why.”

PJ Lou is a son of Sweet Lou out of Silk Pajamas, who was a winner on the New York Sire Stakes circuit. He was purchased as a yearling for $37,000 at the Standardbred Horse Sale by Harder, Dean Lockhart, and Wayne Carleton. In October, the group put the horse in an onGait.com auction, where he sold for $103,000 to Robert DiNozzi.

Following the sale, PJ Lou closed out his 2-year-old season doing what he does — earn money. He picked up checks in his final three races, including a third-place finish in the Kindergarten Classic Series championship and fifth in the Governor’s Cup (at odds of 94-1 and 87-1, respectively).

“He got decent money back quickly,” Harder said. “That’s probably what he’ll do this year again as well.”

So far this season, PJ Lou has a win, which came in a conditioned race at Yonkers on April 26, and two seconds in five starts. He actually was first across the finish line twice this year but was disqualified for going inside several pylons at the midpoint of the W.N. Reynolds Memorial over a sloppy surface at Yonkers in early May.

“It was a dirty, nasty night,” Harder said. “But he was good that night. He’s a fast horse and it seems like he gets around there.”

PJ Lou is staked to many top races the remainder of the year, including the Meadowlands Pace, Adios, Max C. Hempt Memorial, Bluegrass, Tattersalls, Breeders Crown, Matron, and Progress Pace.

The 2-1 morning-line favorite in the second Messenger elimination is Hammering Hank, who was last year’s Kindergarten Classic champ. The field also includes the Matron Stakes winner, Market Based, who is 5-2.