Hamburg, NY — A pair of even money choices dropped the gloves in the stretch drive of Buffalo Raceway’s $12,400 conditioned trot on Friday afternoon (July 1) and it was Sanchez Rocks ($4.00) who delivered the knockout blow over Photo Bomber by a length in 1:59.3. 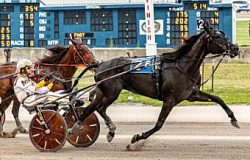 Franks Watching (Ray Fisher Jr.), who eventually finished in third, fired out to the lead from the outside and managed to show the way through an opening quarter in :29.2. Photo Bomber, who relinquished the top, regained the advantage around the second turn and then put up splits of 1:00.1 and 1:30.2.

But Sanchez Rocks (Drew Monti), who patiently waited in third, began his march to the top and was on even terms at the top of the stretch with Photo Bomber (Kevin Cummings). The two were trotting together until Sanchez Rocks put on the afterburners midway down the lane. Thanks to a :29 final panel, he cruised home going away to register the length score.

Owned by Marie Houghtaling and trained by Ronald Houghtaling, it was the fourth win in 17 season’s tries for the 6-year-old gelded Sanchez Rocks (Crazed-Steuben Miss Pine). The triumph moved his 2022 earnings to $35,552 and $111,819 lifetime.

There were a pair of $10,100 trotting events on the matinee program.

Leaping Legend (Mike Baumeister) took the first division with a coast to coast win over Wilberforce (Christian Myers) in 2:00.2. Leaping Legend returned $6.80 for the decision.

The second bracket saw Pennant Seelster (Monti) come charging late and squeeze out a nose victory over Batting Stats (Keith Kash Jr.) in 2:02.4. The win returned $10.40 to his backers.

Monti completed the day by sweeping the final four races on the program while Jim Morrill Jr. and Kyle Cummings each doubled.

Racing will resume on Saturday afternoon at 1:30 p.m. with a 12-race program on tap.