Lexington, KY — A pair of $100,000 eliminations will be contested Saturday night (July 30) at The Meadowlands for this year’s Hambletonian for 3-year-old trotters, with the top-five finishers in each split returning for the $1 million final on Aug. 6.

A win in this year’s Hambletonian would be most satisfying for Schnittker and the rest of the connections of King Of The North as the colt comes into the eliminations winless in four starts this year.

A Hambletonian victory would also be redemption of sorts for both King Of The North’s world champion parents. His sire Walner was the prohibitive favorite in 2017 until suffering a career-ending injury just days before the race, and his dam Check Me Out was the favorite in the 2012 Hambletonian Oaks after winning her elimination but she made a break in the final and after recovering and finishing third she was disqualified and placed eighth for causing interference while offstride. 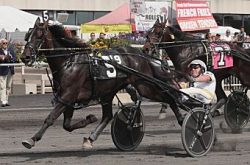 A $190,000 yearling purchase, King Of The North is owned by Schnittker Ward, an entity that includes Schnittker and leading Thoroughbred trainer Wesley Ward, in partnership with Arden Homestead Stable, Nolamaura Racing and Steve Arnold. Schnittker and Steve Jones are the breeders.

At two, King Of The North won six of 10 starts, including the Peter Haughton Memorial, William Wellwood Memorial final and the New Jersey Sires Stakes final. This year, King Of The North didn’t make his first appearance until an early June qualifier at The Meadowlands, where he finished second to Rebuff, which was followed up by a third-place qualifying finish behind star older mare When Dovescry.

“We started him late, which is what we planned on doing, so hopefully he comes up big Saturday,” said Schnittker, who won the 2008 Hambletonian with Deweycheatumnhowe and finished third in 2000 with Armbro Trick and third in 1997 with Armbro Plato.

King Of The North finished sixth and fifth against older horses in his first two pari-mutuel starts this year at The Meadowlands.

“It’s hard to find races for that type of horse,” Schnittker explained about King Of The North’s race schedule. “And in the second start he ran up on a guy and made a break.”

“He raced big last race and it was a good tightener,” said Schnittker about King Of The North, who brings a career bankroll of $623,479 into his Hambletonian elim. “He’s coming into the race in very good shape and I’m looking forward to Saturday.”

“He’s in a good spot and you only have to beat five to make the final,” said Schnittker.

For MacDonald, this will be only his third drive in the Hambletonian eliminations, failing to advance to the final in his previous two attempts. For Schnittker, King Of The North will be his seventh Hambletonian starter and his first since he did not make the final in 2013.

“(King Of The North) is the first horse I’ve made eligible in the past few years,” said Schnittker. “I don’t like putting them in if they don’t have a shot. I had seven or eight others who were possible but I sold them.”

Rebuff, who is two-for-two this year, including a Reynolds division and a Dancer Memorial split (Meadowlands track record-equaling 1:49.4), is the 2-1 morning-line favorite in the first Hambletonian elimination (race nine).

Elimination winners will draw for post positions one through five followed by the remaining finalists receiving posts in an open draw.

Complete entries for the Saturday Meadowlands card can be found at this link.