Hightstown, NJ — Alvin Miller knows what it’s like to bring a longshot to the Dan Patch Stakes. He also knows that anything is possible, even for a longshot.

Last year, Miller’s Tellmeaboutit was 68-1 from post nine in the annual event for older male pacers at Harrah’s Hoosier Park Racing & Casino but came charging from the back of the pack in :25.2 over the final quarter-mile to finish second by a neck to Catch The Fire.

On Friday, Tellmeaboutit again will be a longshot when he meets nine foes in this year’s $315,000 Dan Patch Stakes. The event features headliner Bulldog Hanover, who in his most recent start on July 16 in the William R. Haughton Memorial at The Meadowlands won in a history-making 1:45.4 and brings a six-race victory streak to Hoosier Park. The 4-year-old stallion is the 3-5 morning-line favorite. 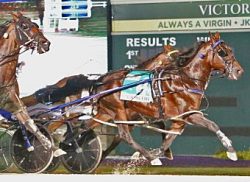 Last year, Tellmeaboutit came charging from the back of the pack in :25.2 over the final quarter-mile to finish second by a neck to Catch The Fire. Dean Gillette Photography.

The field also includes Rockyroad Hanover, who last month won a division of the Roll With Joe Stakes in 1:46.2 and subsequently finished second twice behind Bulldog Hanover, including in the Haughton. Last week, the 4-year-old stallion was second to Catch The Fire, who is sitting out the Dan Patch, in the Sam McKee Memorial.

Rockyroad Hanover is 9-2. The only other horse with morning-line odds less than 15-1 is Abuckabett Hanover, who is 6-1.

Tellmeaboutit enters the Dan Patch with two wins, two seconds and three thirds in his past seven races. Known for his fast-closing style, the 6-year-old gelding has come home faster than :26 seconds four times during that span, including his last two starts.

“He’s not won a lot, but he’s raced decent heading into it,” said Miller, who trains Tellmeaboutit and shares ownership with Twila Harts. “He likes chasing horses down, sometimes he just has a little too much work to do. 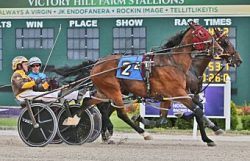 “I think he will be coming with his ‘A’ game. I think he’s ready. Like most of them in there, he’s going to need a little luck with a trip.”

Tellmeaboutit is a son of Tellitlikeitis-Portia Blue Chip, with his mom being a half-sister to millionaire Hypnotic Blue Chip. Tellmeaboutit has won 24 of 78 career races, hit the board a total of 63 times, and earned $732,065. He was an Indiana Sire Stakes champion at ages 3 and 4. He was purchased for $25,000 at the 2017 Hoosier Sale.

“He’s one of them that everybody wants or would like to have,” Miller said. “For a local horse, he’s been a pretty nice one. We just basically race in Indiana. We venture out to Ohio every once in a while, but that’s about as far as we go.

“He’s a pleasure to have around. He’s a nice horse to deal with on a daily basis.”

Tellmeaboutit was the only horse in last year’s Dan Patch with odds greater than 25-1, and Miller himself admitted having little hope.

“Honestly, I didn’t think we had any kind of a shot out of the nine hole,” Miller said. “But they raced aggressively on the front end, and it worked to his favor. It was his kind of race. Obviously, he’s a closer. But he always gives you an effort.

“We need similar kind of luck. We just have to hope it sets up right. You never know.”

The Dan Patch Stakes is race 14 on Friday’s 15-race card. Following is the field in post order with driver, trainer, and morning-line odds.