Mr. Brinkerhoff was born in Wooster, Ohio, Sept. 12, 1937, to Jess and Arlene Brinkerhoff. 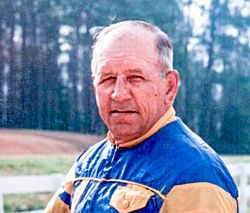 A trainer’s trainer from a harness family, the son of renowned horseman, Jess Brinkerhoff, he definitely had horses in his blood. In Wooster, he won his first race in 1955.

Mr. Brinkerhoff is credited with 1,695 wins during his driving career, conditioning many more to the winner’s circle. Horses were his life and he trained many to become champions including Title Holder, Osborne Creed, Osborne’s Bret, Golly Too (four-time Ohio Sires Stakes champion and 1994 Ohio Horse of the Year), Lark’s Luke, Doc Mistake and Ruffstuff Baker (Triple Crown and Ohio Horse of the Year in 1993).

Along the way, he met his loving wife, Dorothy, and together, not only did they share their love for the horses, but shared their love for Cheryl (Chap) and Tommy (Tue Lah).

He went on to be recognized on the Northfield Wall of Fame (1994) and the Scioto Downs Wall of Fame. He was the Jerry Kaltenbach Memorial Award winner as the leading Ohio Sires Stakes trainer in 1995 and was inducted as the 45th member into the Ohio Harness Racing Hall of Fame in 2019.

In 1981, Mr. Brinkerhoff started wintering his horses in Hawkinsville, Ga. The climate allowed him to train throughout the winter. Hawkinsville also became his home through the years, retiring there in 2017.

He was a strong-willed man that lived life on his own terms. He was always willing and happy to share his knowledge of horses with fellow horsemen.

He was a native of Wooster, Ohio, and a member of the Baptist faith.

He was preceded in death by his parents, Jess and Arlene; his wife of 52 years, Dorothy; and brothers, William and Neal. Survivors include his daughter, Cheryl (Allen) Duncan; son, Thomas Jr. (Truelah); grandchildren, Thomas Myers and Tyler Duncan; and sisters, Florence (Brad) Wallace and Joan Swick.

Services will be held at a later date.

Clark Funeral Home of Hawkinsville, Ga., is in charge of the arrangements.