The first final of the day will be a 2-year-old trot for colts & geldings.  The unbeaten Crown (Brian Sears) should be the one to beat as the 2-1 morning line favorite.  The colt by Chapter Seven-Amour Heiress is trained by Marcus Melander.  He is four-for-four in his young career with NYSS wins at Yonkers, Tioga, Vernon, and Saratoga. His main rival should be the Mark Harder trained The Gruffalo (Dexter Dunn).  The colt by Chapter Seven-Clementine Dream has three wins in six career starts including NYSS wins at Yonkers, Vernon, and Saratoga.  She finished second to Crown at Tioga.

Kayleigh S (Brian Sears) is the 2-1 morning line choice for the 2-year-old filly trot final.  Marcus Melander trains the filly by Chapter Seven-Pasithea Face S.  She has NYSS wins at Saratoga, Batavia, and Yonkers in her five career starts. The Robert Krivelin trained Woolco (Tyler Buter) is the 3-1 second choice.  The filly by Chapter Seven-Upside Hanover is two for five in her young career.  She has NYSS wins at Yonkers and Monticello.

The R Nifty Norman trained Duval Street (Brian Sears) looks to be the one to beat in the 2-year-old pacing colts & geldings final.  The gelding by Huntsville-Native Bride has NYSS wins at Yonkers and Vernon. Three-time winner Blue Hunt (Wally Hennessey) is the 3-1 second choice.  The gelding by Huntsville-All On Top Hanover is trained by Erica Chartrand.  She has NYSS wins at Tioga, Vernon, and Saratoga. 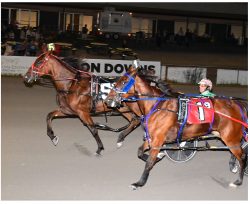 Vivians Dream (Jordan Stratton) is the 2-1 morning line favorite for 2-year-old filly pace final in what looks to be a great three-way battle for the top prize.  Cory Mumford trains the filly by American Ideal-Sports Chic.  Among her six victories was an exciting win in a NYSS leg at Vernon Downs.  She popped the pocket and wore down Twin B Joe Fresh (Roll With Joe-Fresh Breeze) in the stretch to win in a track record time of 1:50.4.  She has won over $200,000 in purses this year.

Revenged minded Twin B Joe Fresh (Dexter Dunn) is the 3-1 second choice.  Chris Ryder trains the filly who just fell short of Warrawee Ubeaut’s world record (1:48.3) by getting a Kentucky Championship Series win at the Red Mile in 1:48.4.  She has four wins and two seconds in six lifetime starts.  Do not count out the Brett Pelling trained Earthwindfire (American Ideal-Road Bet) with Tim Tetrick.  She handed Vivians Dream her only loss by winning a NYSS leg at Yonkers.

Hambletonian winner Cool Papa Bell (Tim Tetrick) leads a field of nine in the 3-year-old trotting colts & geldings trot final.  The gelding by Chapter Seven-Blk Thai Optional is trained by Jim Campbell.  He has four wins this season and seven victories in his career.  He has won nearly $800,000 in his career and would love to add the NYSS title to his resume.  Stanley Dancer Memorial winner, Slay (Joe Bongiorno) looks to be his top contender.  The colt by Chapter Seven is trained by Tony Alagna.  He has four wins this season and has six career victories.  He has won over $375,000 in his career. 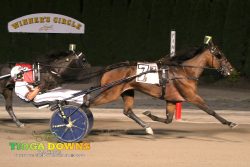 The phenomenal Joviality S (Brian Sears) will be the overwhelming favorite in the 3-year-old filly trotter division final.  Marcus Melander trains the filly by Chapter Seven-Pasithea Face S.  She was second in the Hambletonian and is unbeaten in NYSS action.  She has eight wins in 10 starts this season.  The fabulous filly has 17 career victories and has amassed nearly $1.7 million in purses lifetime.  Valentina Blu (Joe Bongioro) has proven to be a formidable opponent to Joviality S.  Trained by Tony Alagna, she led Joviality S as the reached the stretch just last week during a NYSS leg at Tioga.  Joviality S wore her down in deep stretch but nonetheless the filly by Chapter Seven-Corazon Blue Chip showed she is a contender.  She has three wins this season and four career victories.  She is just short of $500,000 in earnings during her career.

The Travis Alexander trained Pleaseletmeknow (Matt Kakaley) is the 2-1 morning line favorite in the 3-year-old colts & geldings pace final.  The gelding by American Ideal-I Said Please has seven wins this season including the $300,000 MGM Messenger final at Yonkers.  He has 10 career victories including a lifetime best time of 1:50.3 during a NYSS leg ran at Tioga on Aug. 21.  Seven Hundred (Jim Morrill Jr.) is the 3-1 second choice.  Jake Leamon trains the colt by Huntsville-Exclamation.  He has four wins this season including NYSS wins at Vernon, Batavia, and Tioga.

Gotthegreenlight (Jason Bartlett) looks to be the one to beat in the 3-year-old filly pace final.  The filly by American Ideal-Bet On Luck is trained by R. Nifty Norman.  She has six wins this season including NYSS wins at Batavia, Buffalo, Vernon, Tioga, and Yonkers (track record time of 1:51.3).  She has won over $470,000 in her career.  Empire Breeders Classic (EBC) winner Valar Dohaeris (Mark MacDonald) looks to be the toughest opponent.  Ake Svanstedt trains the filly by Huntsville-Bon Mot.  She has four wins, two seconds, and two thirds in eight starts this season.