Topsham, ME – It was a day of records at the Topsham Fair in Maine.  The Saturday afternoon (Aug. 13) racing action saw a track record in the $10.000 Open Trot as Ron Cushing and Swan Fine Lady lowered the track record for 4-year-old trotting mares to 2:01, as she won by a little more than a length. 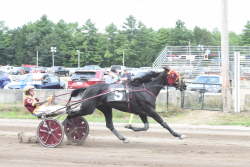 Ron Cushing and Swan Fine Lady lowered the track record for 4-year-old trotting mares to 2:01 in the $10.000 Open Trot at the Topsham Fair in Maine on Saturday. Shelley Gilpatrick Photo.

Swan Fine Lady took back early as Winter Asher-Stalbaum guided the 14-year-old Empire Earl N to the front and he carried the field until the head of the stretch.  Cushing opted to take a second over trip behind J S Peyton, down the backside, but the cover was stalled, and Ron Cushing decided to head back to the inside and wait for an opening at the head of the stretch.

Once she saw daylight, it was all over as Swan Fine Lady trotted her last quarter handily in :29.3.  It was lifetime win number 25 in 75 attempts for the 4-year-ole Swan For All mare and her sixth winner’s circle appearance in 2022.  Swan Fine Lady is owned by Ron Cushing, Kevin Sywyk and Lance Downs, and trained by Heidi Gibbs. 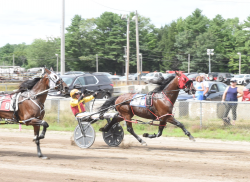 Bruce Ranger and Captain Nash went gate-to-wire to win the $10,000 Open Pace Saturday in 1:56 to set a record for aged horses at the Topsham Fair in Maine. Shelley Gilpatrick Photo.

The $10,000 Open Pace saw Bruce Ranger bring Captain Nash right to the top and never look back.  It got a little bit anxious midway in the lane as his 2-1/2 length lead dwindled and the wire couldn’t come quick enough with the pacesetter winning by a quarter length.  With the teletimer stopping at 1:56, it set a record for an aged horse eclipsing the record that had stood since 1995.  For Captain Nash it was lifetime win number 19 and the sixth win in 2022. Captain Nash is owned by Reginald Duguay and trained by Richard Bartlett.

Heath Campbell took driving honors with eight wins for the week and Val Grondin was the top trainer with five scores.