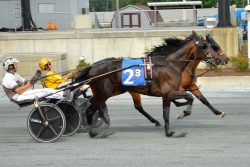 Stafford Jr. and Wyatt Starkey’s Navy Blue, a son of Anders Bluestone, notched his fifth lifetime win in 1:58.4 over Canoe Trip and Wolfpack Russ. Navy Blue is trained by co-owner/driver Stafford Jr. The fastest divisional winner was Nanticoke Racing’s LG’s Reed O Wen, a 1:57.1 winner for trainer Les Givens. The Anders Bluestone gelding set all the fractions and was a narrow winner over Big Daddy D and Jas Bluestone. It was the eighth career win for “LG.”

Pam Wagner’s She’s All Woman had no troubles picking up her eighth lifetime win as the heavy favorite in 1:58.2 for conditioner John Wagner. The Anders Bluestone filly led most of the way and won by three lengths over Franky Doyle and True Blue Mist.

The remaining filly division saw Carlo Poliseno’s Our Last Penny ($2.40 Tony Morgan) maintain a comfortable lead throughout in a three-length win over Antares Star and Giant Arbitration. The CR Commando filly atoned for a miscue in her round one elimination, when she broke at the start. She improved to 4-for-9 lifetime for owner/trainer Poliseno. The top eight point earners from the two legs will return to compete in the $100,000 finals on July 28 on the annual Governor’s Day program during the Delaware State Fair.

Allan Davis and Victor Kirby each had three wins on the card. Jim Morand and Corey Callahan each had a double, and have nearly 17,000 wins between the two accomplished veterans. Callahan is just one win shy of 7,000 career victories.

Live racing shifts to Tuesdays and Wednesday for the next two weeks prior to the customary summer hiatus on July 6. Post time is 4:30 p.m.