Wilkes-Barre, PA – The 2-year-olds saw their first stakes action at The Downs at Mohegan Sun Pocono on Monday (July 4) afternoon, with two $35,000 divisions of a Pennsylvania All-Stars event for trotting colts. 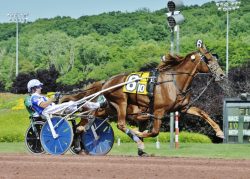 Crantini (6) is along late in taking his PA All-Stars race on the Fourth of July at Pocono. Curtis Salonick photo.

The International Moni – Peach Martini colt Crantini crossed the Canada/U.S. border to make his money debut and then posted a 1:56.4 triumph at first asking in the quicker section. Scott Zeron, big winner on the day with four sulky successes, got the baby away second behind the 1-5 favorite Paramount Legend N (a rare Down Under horse to race on these shores as a two-year-old), then tipped him outside on the far turn. The two freshmen battled each other until Crantini was able to go by by three-quarters of a length for trainer Megan Scran and Thestable Crantini Group. 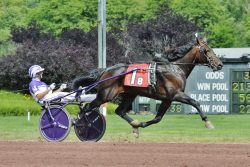 Herodotus (1) is an easy winner in his PA All-Stars action at Pocono on the Fourth of July. Curtis Salonick photo.

In the other division, Herodotus, a Bar Hopping – Regal Woman colt who was named after the man Cicero called the “Father Of History,” started writing his own racing history with a 1:58 victory in his first purse start. David Miller kept the 3-5 choice in third down the backstretch, but then got some fortune when the pocketsitter pulled nearing the three-quarters and he and his colt were able to slide up into the two-hole; from there, Herodotus waited for the Pocono Pike then used it as his path to a 2-1/4 length victory over longshot Dancehall King. Newly-minted Hall Of Famer Ron Burke trains the promising bay for Burke Racing Stable LLC and Weaver Bruscemi LLC along with Hatfield Stables.

During the overnight section of the card, the spotlight also fell on 2-year-olds, specifically an impressive pair of pacers from the team of trainer Tom and owner John Cancelliere. First up was the Sweet Lou – Pineapple Hanover filly Dole Whip, who tipped wide off cover and stormed to a 1:52.4 four length victory for driver Scott Zeron while going her own back numbers in :55.3 – :27.3.

35 minutes later colt Feel My Wrath, a son of the Western Shore – Some Kinda Girl (she out of the $1.5M-winning Cathedra Dot Com) overcame the dreaded tuck-then-first-over journey, covering his back half in 56.1 for a 1-3/4 lengths triumph in 1:54 for driver Braxten Boyd and the Cancellieres. Both of the brothers’ babies were making their purse debuts.

The racing week concludes on Tuesday (July 5) at Pocono with a card beginning at 1:30 p.m.; program pages are available at https://www.phha.org/downsmsppps.html.