Yonkers, NY — Tyler Buter scored the 4,000th driving win of his career when he piloted Dragon Roll to a 1:52.2 victory in the seventh race on Thursday night (July 14) at Yonkers Raceway.

Buter had Dragon Roll, trained and owned by Ricky Bucci, on the lead through fractions of :27.1, :56.2 and 1:24.1 in the $30,000 event for pacing mares, and the 5-year-old Roll With Joe mare dug in gamely through the stretch to defeat this year’s Blue Chip Matchmaker Series champion Drama Act (Joe Bongiorno) by a neck. 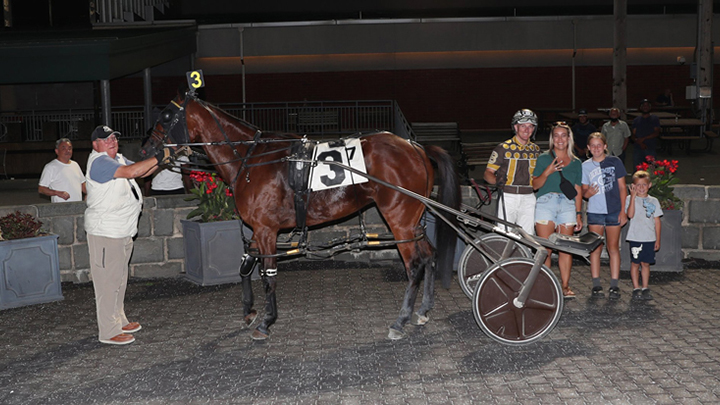 Michigan native Tyler Buter drove the 4,000th winner of his career when Dragon Roll, pictured above, carried him to the milestone on Thursday at Yonkers Raceway. Mike Lizzi photo.

A 36-year-old Michigan native with deep family ties to the sport, Buter started his career in 2002 and made his first appearance in the winner’s circle at the Gladwin County Fair in the Wolverine State. He moved east in 2010 and has been a regular face in the driving colony at Yonkers since then.

His best year in the bike was 2019 when he was victorious 327 times, including in the $500,000 Messenger at Yonkers with American Mercury, and his charges earned $5.69 million. In total, his drives have banked over $51.7 million.