Lexington, KY — Two $100,000 divisions of the Del Miller Memorial for 3-year-old filly trotters are on tap as part of the undercard on Saturday night’s (July 16) Meadowlands Pace Night program at The Meadowlands. The belles of the division in 2021 — Venerable and Joviality S — will meet up for the first time this year in the second division (race three).

Recent Yonkers Trot winner Joviality S has drawn the outside post seven in the second Miller split, with defending divisional champion Venerable starting from post three. The pair of filly trotters have each already surpassed the $1 million mark in career earnings.

This will be just the third time the two have met on the racetrack. Venerable got the best of Joviality S in last year’s $326,850 James Doherty Memorial final on Aug. 7 at The Meadowlands, while the latter turned the tables in the $479,450 Goldsmith Maid final on Nov. 20 over the same New Jersey oval. 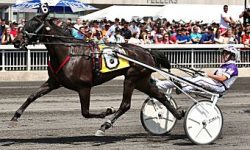 Riding on the wave of her victory over male rivals in the Mohawk Million at Woodbine Mohawk Park, Venerable earned Dan Patch Award divisional honors as the 2021 2-year-old Filly Trotter of the Year.

Heading into the Miller, Joviality S is riding a seven-race win streak dating back to last year, with the daughter of Chapter Seven five-for-five this year, including the $280,904 Yonkers Trot final on July 1 at Yonkers Raceway.

As for Venerable, she won the first start of her sophomore campaign in New Jersey Sires Stakes competition, but then hit a bump in the road when she made a break in the $240,000 NJSS final.

Venerable shook off her miscue with a win in a qualifier and then the daughter of Walner-Jolene Jolene finished a close third in a Reynolds division on July 1 at The Meadowlands. She followed that up with a 1:52.2 victory last time out on July 9 in the Zweig consolation for filly trotters.

“She qualified back good and raced good at Vernon the other day, so hopefully we’re back on track,” said Norman, the 2021 Glen Garnsey Trainer of the Year who conditions the filly for owners Dave McDuffee (voted the 2021 Norman Woolworth Owner of the Year), Mel Hartman, Paul Bordogna and Steve Arnold.

Norman said he’s in awe with how much Venerable has grown since her 2-year-old campaign.

“It’s unbelievable how much she’s grown,” said Norman of the filly whose other wins in addition to the Doherty Memorial and Mohawk Million in 2021 included the Peaceful Way and NJSS final as she joined Snow White and Poof She’s Gone as the only filly trotters to ever win more than $1 million their freshman year. “She almost doesn’t look as good as I would like her to because she’s had such a growth spurt and lost a little bit of weight. But it will all work out in the end.”

Norman admits driver David Miller will have his work cut out for him if he hopes Venerable can topple the Brian Sears-driven Joviality S, but he won’t rule out the possibility.

“The only thing I would say is that (Joviality S) will probably be leaving because she leaves like a rocket, so you have to sit on her back,” he said. “Maybe then she could be a little bit vulnerable, but she looks pretty unbeatable right now.”

With her victory in the Yonkers Trot, Joviality S is a strong contender to again take on the boys in the upcoming Hambletonian at The Big M, but Norman said Venerable is more than likely to take on her peers in the companion Hambletonian Oaks.

“She’ll skip next week and go in the Oaks eliminations,” said Norman. “She won’t race against the boys in the Hambletonian unless she was unbelievable this week.”

A seven-time winner last year, including a Bluegrass Stake division at The Red Mile and a Breeders Crown elimination at The Meadowlands (she finished fifth in the $600,000 final), Lilbitalexis is still searching for her first 2022 victory after four attempts. The Walner filly finished second to stablemate Venerable last time out in the Zweig Filly consolation on July 9 at Vernon Downs.

“She’s had no luck at all, and with the way it’s set up with the three fillies I’ve got, she’s always going to end up in with Venerable, which is a bit of a shame for her,” said Norman of the filly owned by Pinske Sables and David Hoese. “She was run into at The Meadowlands a couple weeks ago, and got buried in against older boys a couple weeks before that. So she hasn’t had much of a prep, but I was very happy with the way she raced at Vernon; I thought she raced super.

“I think she is a little bit of a sleeper. She doesn’t get a lot of credit but she’s a pretty good filly.” 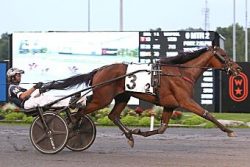 Delilah Hanover has a 5-2-2-1 record in 2022 after a two-win freshman campaign. New Image Media photo.

As for Delilah Hanover, Norman is pleased with the daughter of Muscle Hill‘s 5-2-2-1 record in 2022 after a two-win freshman campaign. Delilah Hanover comes into the Miller off a second-place finish in the $123,000 Zweig Filly on July 9 at Vernon Downs.

“She’s come along good and I’m really happy with her,” said Norman of the filly owned by McDuffee, Hartman, Bordogna and Mary Kinsey Arnold. “I thought she raced great at Vernon and it seems like she’s improving every start. If she can improve a little bit more she can be good in there.”

In addition to his trio of Miller Memorial starters, Norman will also send out three in the $175,000 Dorothy Haughton Memorial TVG Mares Open Pace — Fire Start Hanover, Kobe’s Gigi and Grace Hill — as well as 2021 Hambletonian Oaks champ and reigning divisional queen Bella Bellini as the lone female against 10 males in the $432,000 E.T. Gerry Jr. Hambletonian Maturity for 4-year-old trotters.

A winner of four of eight thus far in 2022 and riding a three-race win streak that includes the Six Pack and Graduate final at The Meadowlands, Bella Bellini will leave from the trailing post 11 in the Maturity — which is raced at a distance of 1-1/8 miles — with driver Dunn.

“I don’t mind the trailing spot in a mile and an eighth, but she’ll have to get lucky,” said Norman. “She’ll have to get out somehow and she’ll have to race her best. That’s how she races her best: If she gets out late she’s pretty tough to hold off. We have to hope for a good trip and that things work out.”

TrackMaster past performances for all Meadowlands cards can be found at the track’s website here.