Monticello, NY — Monday (July 25) saw some of the best racing of the year at Monticello Raceway, when the 2-year-old pacing fillies visited on the fourth leg of their Sire Stakes tour.

The early muddy track conditions didn’t thwart Vivians Dream in her attempt to remain undefeated in her division of New York Sire Stakes racing, for a purse of $52,500. 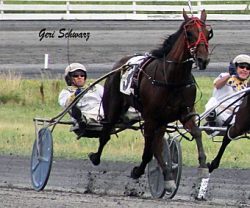 Going into the first turn and down the backside, there was a tussle over who would get the lead first. Alabama Hannah, Hunting Season and Vivians Dream all were in the thick of it. Vivians Dream was parked to the quarter in :27.3 by Alabama Hannah (Tyler Buter) and then cleared.

Down the lane, the two fillies slugged it out in a tight photo finish, but Vivians Dream held off Hunting Season in 1:54.4, just two-fifths of a second off the track record. Dame finished third.

Vivians Dream has now won four consecutive races, all of them in NYSS competition. Monday’s win pushed her earnings to  $106,400. The daughter of American Ideal-Sports Chic, a $50,000 yearling acquisition, is trained by Cory Mumford and was driven by Wally Hennessey.

The second division of NYSS, worth $52,500, had a field of six. Rock My Socks (Jason Bartlett) was first away from the gate and remained on the front end, carrying the pack through fractions of :28.4 and :59.1. Just past the half, the 1-5 favorite Earthwindfire and driver Jack Pelling tipped to the outside and mounted a challenge against the pacesetter, looking her in the eye first over at the three-quarter pole in 1:27.2.

In a spirited stretch duel between the two, Earthwindfire uncorked a :27.4 final quarter and scored by a scant head over Rock My Socks in 1:55.2. Linemup Knockmback (Tyler Buter) finished third.

It was a new lifetime mark for the American Ideal-Road Bet daughter, who is trained by Brett Pelling for owners Melvin Segal, Kentuckiana Racing Stable and Tulip Racing.

For the complete charts of Monday’s action, click here.