Batavia, NY — The New York Sire Stakes visited Batavia Downs for the final time this year on Wednesday (Aug. 31) with a dozen 2-year-old trotting colts and geldings competing for the remaining spots in the finals to be held during the Day of Champions at Tioga Downs on Saturday (Sept. 10). 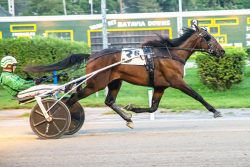 Cecil Hanover (Ake Svanstedt) left and led the field to the quarter where Met Your Request (Andy Miller) assumed the top position as the clock read :29. Positions remained unchanged to the half when Svanstedt tipped Cecil Hanover and regained control of the race past the five-eighths. At that point Met Your Request and Tillio’s Action (Mile Merton) both made breaks and Cecil Hanover was on top by 4-½ lengths going by three-quarters in 1:29. Coming off the far turn the race was over as Cecil Hanover trotted home on his own and won easily by 4-¾ lengths in a lifetime mark of 1:58.2.

Jax Spratt (Kevin Cummings) took command and went :28.4 and 1:00 to the half as Sevecheetah (Trond Smedshammer) and The Strawboss (Jim Morrill Jr.) followed close behind. The first to pull was Onion Gum (Jordan Stratton) who moved from fourth and was quickly second and only one length off by three-quarters. It was a real race around the last turn and when they hit the straight three horses had a shot. Jax Spratt was still on top but Onion Gum was wearing him down. Sevecheetah then found room at the pylons and was barreling towards the wire. But Onion Gum chewed up the most ground to the line and won by one length in 1:59.4. 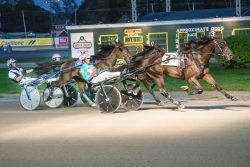 Jordan Stratton continued his driving dominance at Batavia Downs on Wednesday after winning another four races on the card. Beside his victory with the aforementioned Onion Gum, Stratton also scored with How About Murph (1:56.2, $7.40), Dashintothebeach N (1:54.1, $5.00) and the aptly named Grand Slam Hero (2:02.2, $16.00). Stratton was in town last Friday (Aug. 26) and registered a hat trick during the night, giving him a total of seven wins in his last 15 drives in Genesee County.

Free full past performance race programs for all live race days can be downloaded by visiting the track’s website at bataviadownsgaming.com and clicking the “Live Racing” tab.