Paris, France — For the second consecutive year, the world’s richest under saddle race, Prix de Cornulier, raced Sunday (Jan. 22) at Vincennes in Paris, France, was won by the mare Flamme du Goutier with Matthieu Mottier in the saddle. 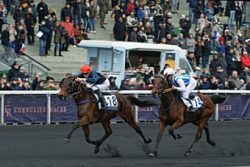 Flamme du Goutier came from behind to beat leading Granvillaise Bleue by a length. Kanal 75 photo.

Flamme du Goutier came from behind to beat leading Granvillaise Bleue with Camille Levesque by a length, timed in 1:55 (mile rate). Third was Hanna des Molles with Alexandre Abrivard, making it again a mare’s race, as they finished 1-2-3.

Flamme du Goutier is trained by Thierry Duvaldestin and got the winner’s purse of 315,000 Euro. She is sired by Ready Cash, who had a great day as a sire with offspring winning four races in a row. Further, two sons to Ready Cash each sired a winner, so six of nine at the card had Ready Cash as a sire or grandsire.

Duvaldestin will not only have Flamme du Goutier racing in the Prix d’Amerique, but also the likely favorite, Idao de Tillard.