Hamburg, NY – Goldin Kid ($16.20) answered the call late in the $20,000 Opportunity Knocks series finale at Buffalo Raceway on Friday afternoon (July 15) by defeating Ruthless Dude by a neck in 1:58.0 over the fast track. 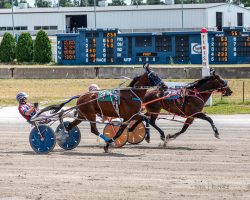 With just six previous lifetime starts under his belt, all coming this season, the 5-year-old horse Goldin Kid (Keith Kash Jr.) saved his best performance of 2022 when the big payday was on the line.

Ruthless Dude (Jim Morrill Jr.) tried to lull the field to sleep with soft early fractions of :30.1 and 1:00.2. But things began to pick up the second time around as Ruthless Dude hit the final panel in 1:28.4, maintaining the advantage turning for home.

Goldin Kid was in the ‘golden’ spot in the pocket and was relentless as he cruised up through the passing lane, nudging past Ruthless Dude in a seasonal best time of 1:58.0. Silverhill Blaze (Drew Monti) was third.

Owned and trained by Marc Shuttleworth, it was the third victory in seven starts on the year for Goldin Kid (Art Major-Crazy Luv Bug). The win moved his seasonal and career earnings to $21,110.

In the $10,000 Opportunity Knocks consolation bracket, the heavy chalk Lyons Anita (Drew Monti) didn’t disappoint her backers as she strolled to a 3-1/4 length victory over Catch The Wave (James McNeight Jr.) in 1:57.3. Lyons Anita returned a paltry $2.60 to his faithful followers.

The $16,500 Open Trot saw 2022 ‘Trotter Of The Meet’ Mugshots Bro ($2.60) make a final curtain call at Buffalo Raceway by dealing a neck setback to Franks Watching in a seasonal best 1:56.3. All About Thechase (Mike Caprio) took the show position.

Managing to get to the front early, Mugshots Bro (Morrill Jr.) was the boss on the front end, using splits of :28.3, :58.4 and 1:28.1. In the stretch drive, Franks Watching (Ray Fisher Jr.) did everything possible to track down Mugshots Bro couldn’t find that extra oomph to get by.

Co-owned by Herman Niedhammer and Herman Niedhammer Jr. and conditioned by Shawn McDonough, the 10-year-old gelded Mugshots Bro (Jailhouse Jesse-Photo Emmy) has posted six victories in 10 tries on the campaign. The win moved his 2022 bankroll to $48,875 and $329,395 in his career.

The 2022 season at Buffalo Raceway concludes on Saturday afternoon at 1:30 p.m. with a 10-race program slated.