Cumberland, ME — A capacity crowd provided record wagering on the $240,000 Maine Breeders Stakes (MSBS) freshmen finals at the 150th Cumberland Fair on Saturday (Oct. 1) afternoon.  Some of the usual suspects grabbed the spoils, and along with a few spoilers, the action provided fans and punters with an exciting day of Pine Tree State harness racing.

Four different trainers enjoyed hoisting the champion’s crown for the 2-year-old Maine-sired divisions, with each race boasting a purse of $60,000 or more.

The $60,684 MSBS 2-year-old filly trot opener saw 1-5 favorite She’salilbitmouthy (Victor Blue Chip-Beluga) leave from pylon position and never have an anxious moment.  Mark Athearn drove the Victor Blue Chip lass to a wire-to-wire victory in a lifetime best 2:06.2.  Trained by Gretchen Athearn, the filly is owned by Bill “Yarmouth Lumber” Phipps and now has eight wins in nine seasonal starts with earnings over $90,000.

The freshmen trotting colts and geldings were up next in the $60,864 MSBS final, with the results not turning out like the betting public had envisioned.

4-5 favorite Outlawofthevalley (Kevin Switzer Jr.) left swifty from post two and set opening fractions of :30 and 1:01 while Wabanaki (Ivan Davies) were parked out and moving from the start.  By the third panel of 1:30.4 Wabanaki had a quarter-length advantage and started to draw clear of the rest of the field.

Tripping the timer in a new lifetime best of 2:01.3, the son of Boy Band won by 7-1/4 lengths for trainer/driver Ivan Davies.  Wabanaki paid $11.40 to win and is the homebred property of Mike Andrew.

Driven by Andy Harrington for owner/trainer/breeder Marc Tardif, the daughter of Western Maverick went right to the top and never looked back, scoring in 2:00.3.  It was the seventh consecutive stakes victory for the frosh filly, who has dominated her division throughout the season.  She paid $2.20 to win. 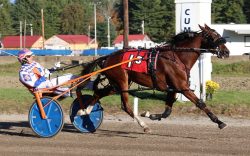 Rounding out the afternoon’s Maine Breeders Stakes finals was the $61,067 MSBS for 2-year-old pacing colts and geldings.  The public had faith in the Grondin stable’s Two Towns Over (Aaron Hall) and was not disappointed.

Scoring from pylon position, driver Aaron Hall left swiftly with the son of Deuce Seelster and got every call to provide the gelding a new 1:57 lifetime mark to go with his champion’s crown.

One more leg for the Maine-bred sophomores head to historic Fryeburg, Oct 6–8.  The Maine Breeders Stakes 3-year-old finals return to Bangor on Oct. 15.