East Rutherford, NJ – He might have a way to go to get his connections even, but Little Expensive is well on his way.

The son of Muscle Hill-Seviyorum impressed in his parimutuel debut, taking the second of three $30,000 divisions of the first leg of the New Jersey Sire Stakes for 2-year-old colts and geldings on the trot at the Meadowlands Thursday night (June 30), the first of two straight Thursdays that will see live racing at the Big M.

The price tag was steep on Little Expensive, but his trainer liked what she saw early on.

“I campaigned his mother,” said Julie Miller. “And I had seen the colt when he was a weanling. I just followed him a little bit and went to Blue Chip Farm to see how he looked and was fortunate enough to have partners willing to pay what we paid.”

At the Lexington Select Sale, the Andy Miller Stable, Daniel Plouffe and Jean Goehlen plunked down $260,000 to acquire the bay colt, and so far he has been flawless, winning a 2-year-old qualifier at The Big M on June 25 in wire-to-wire fashion in 1:56.4 before scoring Thursday in 1:54.3. 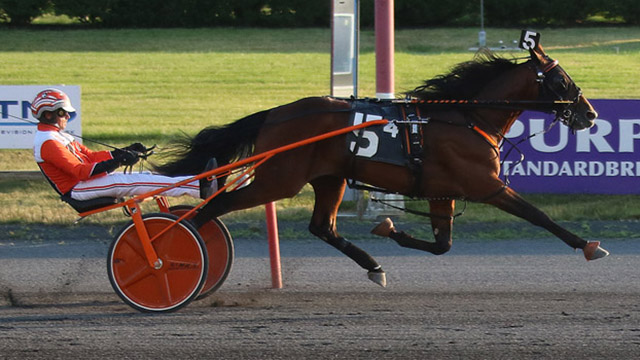 Little Expensive and Andy Miller hit the wire first in a division of the New Jersey Sire Stakes at the Meadowlands Thursday night. Lisa Photo.

Driver Andy Miller never had an anxious moment, rolling down the pike while cutting out fractions of :28.3, :59 and 1:28 before reporting home a 1-1/2-length winner over Point Of Perfect. Winner’s Bet was third.

“I would have loved to have another baby race,” said Julie. “But Andy said tonight he was way better than in his first outing. When you have that nice a baby race, people take that into consideration. These 2-year-olds, they are great, but they give you stress. We are looking for a good year on the Sire Stakes circuit, and he is also staked quite heavily.”

In the first division for colts and geldings, Dire Straits (Muscle Hill-Southwind Cocoa) out-dueled Oh Well to the wire by a nose in 1:53.4 in a battle of the Melander brothers, with driver-trainer Mattias getting the better of trainer Marcus. Dire Straits was the favorite by less than $100 over the second-place finisher and returned $4.40 as the 6-5 public choice.

The final division for males went to Upstaged (Muscle Hill-Stage Fright) for driver Tim Tetrick and trainer Marcus Melander in 1:54.3 as the 4-1 second choice.

Quick Stop (Tactical Landing-Falls For You) pulled off an 18-1 surprise in the first of two splits for fillies in 1:55.3 for Dexter Dunn and Anette Lorentzon, while Mambacita (Tactical Landing-Bill’s Lady) took the other filly division in 1:56.2 for David Miller and Tony Alagna as the 2-1 second choice.